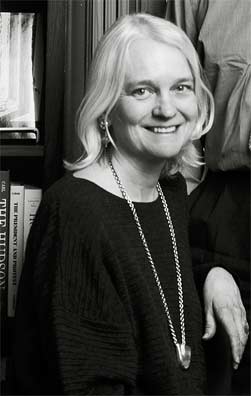 Fordham mourns the loss of Helen Tartar, editorial director of Fordham University Press (FUP), who was killed on March 3 in an automobile accident in Colorado.

The University will hold a memorial for Tartar on Tuesday, April 8 at 6 p.m. in the McNally Amphitheatre, on the Lincoln Center campus.

Tartar joined FUP as editorial director in October of 2003, after a 20-year career in scholarly publishing on the West coast. During the last decade, she helped strengthen FUP’s reputation in the traditional areas of philosophy and religion, and expanded far into other areas such as anthropology, literary studies, and political theory.

“Helen Tartar spent her career nurturing and promoting the work of other scholars,” said Joseph M. McShane, S.J., president of Fordham. “In her, the humanities had an eloquent and tireless champion. Her loss is deeply felt at Fordham, personally and professionally. I know the University community joins me in holding her family and friends in our hearts and in our prayers.”

A highly respected and sought editor in the humanities, Tartar was also able to attract top scholars to FUP, with such authors as Judith Butler, Veena Das, Jacques Derrida, Geoffrey Hartman, and Jean-Luc Nancy choosing to publish with Fordham’s press and helping raise its profile nationally and internationally.

Tartar was born in 1951 and earned her bachelor’s degree in English from Swarthmore College. She went on to study at Yale University, where she earned two master’s degrees—one in English in 1975 and one in East Asian Studies in 1978.

Tartar, through her acquisitions, gained a reputation and wide influence for having deep expertise in humanities scholarly publishing. When her position at Stanford University Press was eliminated in October 2002, dozens of scholars registered their displeasure. Upon news of Tartar being hired at Fordham, Daniel Boyarin, chair of the Department of Near Eastern Studies at the University of California at Berkeley, was the first among many authors Tartar had championed who brought their books and future projects to Fordham.

In 2007, Tartar helped organize the Centennial Celebration of FUP, which attracted an ambitious roster of international scholars that included the prominent philosophers Judith Butler and Jean-Luc Marion. (Both scholars have since published with FUP under Tartar’s editorial direction.)

“Helen was one of the most passionate and dedicated editors in the academic publishing community, and I feel fortunate to have had the opportunity to work with her for the past five years and to collaborate with her on transforming Fordham University Press into one of the leading scholarly presses in the United States,” said Fred Nachbaur, FUP’s director, in a statement on the FUP website. “I was in awe of her tireless commitment to enhancing scholarship in the humanities and social sciences, and her ability to attract a devout group of authors.

“Helen told me on several occasions that her books were her children. Despite her countless accomplishments, Helen remained quite modest.”

In all, Tartar brought more than 650 acquisitions under the FUP logo, including some of the most-respected names in scholarly publishing. Among them are Harry Berger, Jr., Hélène Cixous, Marjorie Garber, Jonathan Goldberg, Mark D. Jordan, Jacques Lezra, Catherine Malabou, J. Hillis Miller, and James T. Siegel.

In a 2004 interview with Fordham magazine, Tartar said that she took pleasure in creating a booklist that displayed what she termed “discursive coherence”—one that included microbiology to sociology to literature to philosophy, drawn together less by theme and more by a quality of mind or thinking.

She said she enjoyed being an editor in part because “you’re a perpetual student . . . you’re constantly learning, even if [the authors]are much younger than you are.”

“Part of [my]task in the job is to enhance the role of the press as an asset to the university,” said Tartar. “I also want to renew a profound intellectual joy I had, a sense of bringing truly exciting books into the world, things that will keep people thinking for decades.”