skip to main content
Return to Fordham University
You are at:Home»Inside Fordham»Medieval Scholar Charts the Development of Western Philosophy 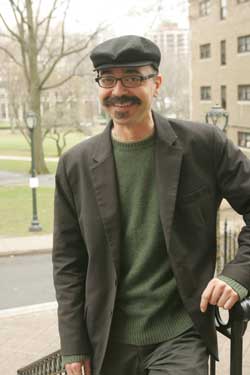 Giorgio Pini, Ph.D., uncovered centuries-old notes in a Milan, Italy library that were believed to have been lost.
Photo by Bruce Gilbert

It was almost inevitable that Indiana Jones came up when Giorgio Pini, Ph.D., associate professor of philosophy, discussed an ancient manuscript he “discovered” some years ago at a library in Milan.

But Pini wasn’t comparing himself to the main character of the blockbuster films.
In fact, the professor who specializes in later medieval philosophy was downplaying his role in the discovery of notes written by John Duns Scotus, one of the most important and influential philosopher-theologians of the High Middle Ages.

“It was there in the library, so it’s not like I discovered it in a cave, but it was a piece of work by Scotus that the scholarly community knew he had written but didn’t know where it was,” Pini said about a work in which Scotus analyzed Aristotle’s Metaphysics.
“Scotus was a big target during the English Reformation and we know that many manuscripts were burned,” he explained. “It became the symbol of the old scholastic thinkers. They wanted to get rid of all that stuff so they destroyed a lot of it.”

Scotus, who earned the nickname “the Subtle Doctor” because of his complex and nuanced thought, died at an early age, leaving much of his work in disarray. Pini, doing research some years ago at the Ambrosian Library in Milan, stumbled upon a reference to the lost work while reading an article. He then made the discovery after an exhaustive microfilm search.

Presently working to finish an edition on Scotus’ notes, Pini said he is drawn to medieval metaphysics between the 13th and 14th centuries because he considers it a key moment in the development of philosophy.

“That is when many things changed—the way we understand the world, ourselves, the way we think and the way we will, and how we were actually originated,” Pini said. “I’m interested in how that passed from the very sophisticated university discussion to the more common level. And you can trace it if you study the history through textbooks and manuscripts.”

That’s precisely what Pini researches when he is not teaching at Fordham. He pores over tons of medieval philosophic works. The challenge is that much of this work, typically written in Latin and in peculiar handwriting, is unpublished. That’s where the Indiana Jones part comes in—traveling to faraway places to read dusty manuscripts. While it can be frustrating, the adventurer in Pini also finds it exciting.

“It’s a big job. You have to bridge a big gap to be able to understand and interpret what they were saying,” Pini said. “But you are in direct contact with the materials these philosophers wrote.”

In the case of Scotus, who did not have the opportunity to leave his “last word” because of his early passing, Pini has much to figure out.

“Scotus’ students were left with this literary legacy and they had to give some kind of coherence to it,” Pini said. “The problem is what they did is slightly different from what their master did, because some of it was controversial or just difficult to understand. So it is less stimulating. Sometimes when we go to the original source, we see it’s much richer. But it is also interesting to see why some things were developed and why others weren’t.”

Some of the thoughts that were developed in this exotic period, Pini said, are absolutely relevant today.

“Take freedom. Freedom was discussed at length—in particular, the sin and fall of Lucifer,” Pini said. “Why did Lucifer sin if he was in the best possible situation? Why did he make the wrong choice?”

The Aristotelian way of thinking was that we do things only if we see that it is a good choice for us, Pini said. But apparently there is no rational reason why Lucifer chose to sin.
“
He was very smart, so we can’t say he was ignorant,” he said. “That’s when these philosophers developed the idea of free will. Paradoxically speaking, we are free because we can refuse to do what is best. In some sense, we are free because we are able to behave irrationally.

“What they said about freedom sparks debate even today, in political fields and so on,” Pini said.

That these philosophers came up with such strikingly original thoughts using nothing but their own intelligence and the truths of faith is why Pini is hooked.

“The more I read, the more I am rewarded,” he said.