skip to main content
Return to Fordham University
You are at:Home»Inside Fordham»Legal System Has a Long Way to Go for the Poor 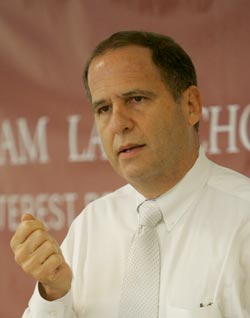 Two years ago, on the 40th Anniversary of Gideon v. Wainwright, a landmark decision that established the right to adequate counsel for people held in criminal cases, the National Committee on the Right to Counsel was founded to examine whether defendants who cannot afford to hire a lawyer receive competent legal representation. The committee was also charged with recommending reforms. A Fordham Law School panel held on Thursday, Sept. 14, suggested that there is still a great distance to go: some of the country’s poorest citizens facing criminal charges are still denied the right to an adequate defense.

“The system throughout the United States is broken,” said Marcus. “The ethical lapses that one sees across the country are nothing short of shocking.”

Marcus said that indigent criminal defense in the United States is inadequate and in need of serious repair; the current judicial system fails many poor defendants, and a partial remedy would be to allocate more resources for public defenders. Increased funding would allow public defenders to hire additional attorneys to reduce caseloads to so they may devote meaningful time to prepare, hire the investigators and expert witnesses necessary to defend a case, and provide increased compensation to attract and retain experienced attorneys.

“We have a system that’s gone topsy and is completely out of control,” said Jonathan Gradess, who heads the New York State Defenders Association. “Every day, we have the same problems. In county after county, systems are unaccountable.”

According to Gradess, the legally mandated plans for public defense representation just in New York state “…differ in scope of service, staffing, support services, investigation capacity, courts covered, training requirements, appointment practices, skill level, eligibility standards, hiring, firing, client grievance mechanisms, and in practically all other respects,” he said. “No two plans are similar except by accident; the common element in these plans is governmental neglect.”

Inadequate resources for attorneys in indigent defense services is especially prevalent in some jurisdictions in upstate New York, according to Gradess. In some cases, lawyers meet their clients for the first time in court on the day of the court appearance. This is in stark contrast, he said, to the idea of a legal system many people assume is adequate to care for the needs of the indigent—where defendants meet with their lawyers before appearing before the judge, their lawyers can investigate the facts and the law, describe the options and provide meaningful counsel, and the accused can play an active part in his or her own defense and make an informed decision of critical matters. Gradess said public defenders rarely have even the basic resources needed to fully investigate a case.

The Legal Aid Society’s Seymour James agrees that public defenders face serious challenges, and yet lawyers working on such cases have an obligation to uphold the highest standards of practice. “Public defenders should provide the same level of service as a private firm,” said James. “We believe that we still have a long way to go.”