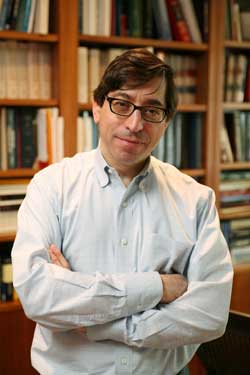 Bruce Green, director of the Louis Stein Center for Law and Ethics, is concerned that young lawyers are required to bill up to 2,200 hours annually. Photo by Michael Dames

The world of the law can be a murky place. Consider a defense lawyer assigned to a criminal case in which the defendant is obviously guilty. How zealously should the lawyer mount a defense? Is it appropriate to do everything the law allows to win an acquittal, thus preventing justice from being served?

These kinds of questions are elemental to the research of Bruce Green, the Louis Stein Professor of Law and director of the Louis Stein Center for Law and Ethics at Fordham.

Green was a law clerk for U.S. Supreme Court Justice Thurgood Marshall from 1982 to 1983. He was a prosecutor in the office of the United States Attorney for the Southern District of New York from 1983 to 1987 before coming to Fordham in 1987.

Since prosecuting is the realm that Green knows best, the process of deciding who to charge with a crime and what charges to bring is a big part of his teaching.

“At what point do you say, ‘I’m not personally certain enough about this person’s guilt. And I don’t feel comfortable indicting or trying the case even if the police officers or the agents who investigated the case feel confident that they got the right person?’ It raises tensions if you dismiss a case that agents or officers think is worthwhile,” he said.

“I encourage my students to feel a sense of personal responsibility, that they have to exercise individual judgment in the work they do,” he explained. “Sometimes I talk about my own experiences to try to get them to understand the tensions on different sides of a question that a prosecutor will face.”

He also is active in several bar associations, including the American Bar Association (ABA), in which he co-chairs a committee on criminal justice ethics. As a result of his and others’ efforts, the association adopted last February an ethics rule for prosecutors who receive evidence that suggests the person they convicted is innocent.

The rule requires prosecutors to disclose and investigate the new exculpatory evidence and to try to set the conviction aside if they become convinced that an innocent person was convicted. Green said that it was gratifying to get the rule passed, because it was important to make it clear that with an increasing number of defendants’ guilt being disproved by DNA analysis, prosecutors have an obligation to rectify mistakes.

“The prosecutors with whom we worked in the bar association didn’t resist the proposal on the substance. But some of them resisted out of fear about how the rule would be interpreted, or out of concern it would lead to a lot of nuisance complaints against them,” he said. “Disciplinary authorities might launch investigations of meritless complaints and make their lives difficult. We took those concerns seriously.”

An even tougher challenge lies ahead, namely, convincing bar associations to adopt similar rules for private lawyers to allow them to come forward when they know an innocent person was wrongly convicted. That’s touchier, because if a lawyer reveals information that came from his client or from anyone else while representing a client, he will be violating attorney-client confidentiality.

“Some people say there ought to be no new exceptions to the confidentiality duty, because every time you add an exception, you discourage people from trusting their lawyers,” he said. “Other people say the idea that innocent people should not be convicted ought to trump keeping clients’ confidences.”

Green’s work on behalf of his profession has earned him election as vice chair of the ABA’s criminal justice section, which puts him in line to serve as chair in 2010.

“Lawyers collectively can accomplish a great deal. A lot of what I’ve done with other lawyers has been in the ethics area, working to interpret the ethics rules and occasionally to convince the bar and the courts to adopt new ethics rules,” he said.

A prolific contributor to law journals, one of Green’s recent papers was “The U.S. Attorneys Scandal and the Allocation of Prosecutorial Power” in the Ohio State Law Review. He and a co-author examined how decision-making is divided in federal criminal cases between the attorney general, U.S. attorneys and trial prosecutors.

The article’s point of departure was the Bush Administration’s dismissal of seven U.S. attorneys in 2006 for reasons that evidently related to partisan politics. Green acknowledged that in the end, the public may never know how extensively partisan politics played a part in the firings.

“It is surprising that a lot of U.S. attorneys were asked to resign at the same time by the president of the party that appointed them. Obviously if a Democrat gets elected in November, the tradition is to pretty much replace all the Republican U.S. attorneys with Democratic appointees. That’s nothing new; but in the middle of a presidency, that was really unusual,” he said.

The article suggests that greater deference to low-level prosecutors may be necessary to prevent improper partisan considerations from entering into criminal prosecutions. This challenges the ordinary thinking, which is that decision making at the top is needed as a check on rogue trial prosecutors.

Of course, being up-to-date on legal trends has kept him abreast of other worrisome developments. Green said that when he graduated from Columbia Law School in 1981, lawyers in New York City corporate law firms thought they were being overworked because they were required to bill 1,600 to 1,800 hours a year. But today’s graduates who go on to top law firms bill as much as 2,200 hours. As a result, pro bono work for indigent clients and bar association work gets pushed aside, he said.

“Over the course of two centuries, we lawyers have worked out how to represent a guilty client, but we haven’t worked out how to lead a normal life and have a family and serve our communities and do all the other things we think we ought to do,” he said.

Lack of service to the community is not an abstract problem. Justice Sandra Day O’Connor, who spoke recently at the Stein Center, noted a survey showing that more Americans can name two of the Seven Dwarfs than two of the nine Supreme Court justices.

“Lawyers potentially have a role to play in civic education in their communities, and yet, you can’t do these things if you’re working onerous hours,” Green said.

If nothing else, Green said ethics is more on lawyers’ radar screens, in part due to bar associations and entities like the Stein Center, and also because lawyers are increasingly susceptible to civil liability claims from disgruntled clients.

“When I started, lawyers were not required to take continuing education; now most lawyers in New York have to take 24 credits every two years, including four credits of legal ethics,” he said. “So again, there’s a lot more attention to legal ethics in the profession as well as in law schools. That means those of us who teach legal ethics are more in demand now by the bar associations and others to speak about our subject.”