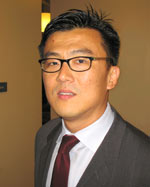 The Fordham University School of Law and Sungkyunkwan University College of Law (SKKU) in Seoul, South Korea, have entered into a student exchange agreement that will allow up to four Fordham law students to spend a semester at the Korean university and up to four SKKU students to attend Fordham.

The exchange program, which grew out of a summer institute that the two law schools have been operating since 2006, will bring together American and Korean students with those from several other countries. As part of the program, Fordham law students will develop Korean-language skills while learning about the country’s legal system. American students in the program will also be eligible to apply for internships at South Korean companies, law firms and governmental agencies.

“Fordham Law School’s ongoing and developing relationship with SKKU gives Fordham law students access to one of Korea’s finest law faculties and the exchange programs help U.S. students to develop contacts in and knowledge of one of Asia’s most important global economies,” said Thomas H. Lee, associate professor of law and director of international studies at the Law School, who created the summer institute and serves as its director.

After only two years in operation, the Fordham-SKKU Summer Institute of International Law has emerged as the second largest summer study abroad program of any U.S. law school. In its first year, the institute enrolled 87 students from three countries. This summer, enrollment increased to nearly 100 students from five countries.

Lee, who is of Korean descent and speaks the language fluently, said that the Law School had wanted to develop an exchange program in Asia for some time to complement similar initiatives in Europe. South Korea, as the world’s 11th largest economy, was an obvious choice.

During the 2007 summer institute, U.S. law students spent three weeks at Sungkyunkwan University taking an intensive international law class taught by faculty from Fordham and Columbia law schools. About 80 percent of them, Lee said, stayed in South Korea for an additional five weeks to intern at South Korean companies, courts and law firms. The semester program will allow for an even more extensive immersion in Korean society and its legal system, he said.

One of the summer institute’s strongest draws is that Sungkyunkwan University is sponsored by the Samsung Foundation, a division of the Samsung Group, South Korea’s biggest corporation and parent of the electronics giant. Lee said that about half of the students in the summer program complete an internship at Samsung.

Sungkyunkwan University, which was founded in 1398, is considered one of the most prestigious universities in South Korea. The literal meaning of Sungkyunkwan is an institution for building a harmonious society of perfected human beings. Eighteen schools and three colleges on two campuses offer degrees at the bachelor’s level, and 12 graduate schools confer various master’s and doctoral degrees.

It’s likely that most of the students taking advantage of the semester exchange initially will be Korean, Lee said, because the classes at SKKU will be taught in Korean. The university, however, recently hired an American law professor to teach courses in English, Lee said, and it intends to hire others, making the program more broadly accessible to U.S. students.

Lee believes that there will be many Korean students interested in studying at the Law School.

“There is an incredible demand for U.S. legal education over there—not just in Korea but throughout Asia,” Lee said. “We’re planning to expand beyond Korea … and with Fordham being ranked 25th in the nation [by U.S. News and World Report magazine] there is definitely a buzz about Fordham Law School wherever we go in that part of the world.”