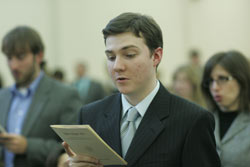 A student recites the pledge of Alpha Sigma Nu as part of the induction ceremony. Photo by Bruce Gilbert

More than 125 Fordham students representing all 10 schools of the University were inducted into Alpha Sigma Nu, the national Jesuit academic honor society, at a ceremony on April 7. Two faculty members and one administrator were welcomed as honorary members.

Inducted as honorary members were:

Veronica Boland, administrative assistant to the dean of Fordham College at Rose Hill, who received the Sursum Corda Award this year at the University Convocation; Constantine “Gus” Katsoris, Ph.D., the Wilkinson Professor of Law at Fordham Law School; and Anne Mannion, Ph.D., associate professor of history at Fordham College at Lincoln Center and co-director of the Center for Teaching Excellence.

Michael Tueth, S.J., the associate chair of the Department of Communication and Media Studies, was the guest speaker at the ceremony.

Alpha Sigma Nu is the honor society of Jesuit institutions of higher education. The society was founded in 1915 to honor a select number of students each year on the basis of scholarship, loyalty and service. Inductees demonstrate an intelligent appreciation of and commitment to the ideals—intellectual, social, moral and religious—of Jesuit higher education. Chapters also may initiate honorary members—people who display the outstanding qualities sought by Alpha Sigma Nu members.