skip to main content
Return to Fordham University
You are at:Home»Faculty Profiles»Jesuit Examines Link Between Spirituality and Mental Health

Ten years ago, a patient recovering from depression told John J. Cecero, S.J., associate professor of psychology, “I’m not depressed anymore, but I’m not happy.” At the time, this observation gave Father Cecero pause, and it resounds in his scholarship and clinical work even today. 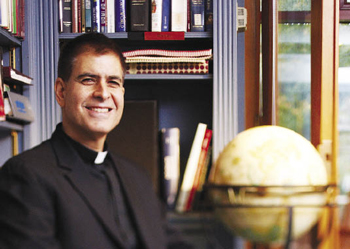 John J. Cecero, S.J., is conducting research to determine the empirical validity of the Spiritual Exercises.
Photo by Ryan Brenizer

“I found that very intriguing,” he said. “So much so that it led me to dig a little bit deeper and think, ‘What’s missing here?’”

Until then, Father Cecero had been treating the symptoms of substance abuse, anxiety, depression and relationship difficulties using schema therapy. This form of cognitive therapy confronts patients’ early fears and their resulting expectations in order to help them think differently about themselves and others.

After that conversation, however, he increasingly questioned whether symptom reduction was rightly the ultimate goal of psychotherapy.

“Psychologists were beginning to think, ‘Maybe we could—when a person comes in for treatment—not just get them feeling better, but actually on a road to optimal functioning, so that they will have learned through the experience of going through the illness and the recovery and come out on the other side happier and more productive than they were originally.’ This struck home for me,” he said.

Having embraced this tenet of the then-new field of positive psychology, Father Cecero began seeking a way not merely to decrease patients’ symptoms, but also to help them lead happier lives.

The answer, he discovered, was to integrate a spiritual focus with cognitive treatments. As outlined in his book, Praying Through Our Lifetraps: A Psycho-Spiritual Approach to Freedom (Catholic Book Publishing/Resurrection Press, 2002), Father Cecero found spiritual activities such as prayer, meditation, contemplation and the practice of virtuous behaviors to be an effective supplement to cognitive interventions.

Spirituality, he discovered, does not merely help buffer against psychological symptoms; it actually helps patients to flourish.

“Flourishing,” according to Father Cecero, is a term used in positive psychology to describe the very state he had been hoping to help his patients achieve: optimal functioning with resilience and an orientation toward growth.

To explain how spirituality can help bring about flourishing, Father Cecero cited the traditional Christian virtues of hope, love, forgiveness, gratitude and humility. Practicing these virtues, he said, increases positive emotion, which promotes flourishing. A spiritual focus, he added, also can give patients a greater motivation to flourish.

“If we really see ourselves in the image and likeness of God and that our vocation is to become like God, that is a motivation to practice the godly virtues,” he said.

Father Cecero’s latest work has extended the concept of flourishing well beyond the clinical context. His current research focuses on how people of sound mental health use spirituality to flourish. As an educator and Jesuit priest, he is particularly interested in flourishing’s relationship to academia and to Ignatian spirituality.

Father Cecero recently has worked with Giselle Esquivel, Psy.D., a professor of school psychology in the Graduate School of Education, to develop a measure of faculty spirituality at Fordham. He plans to integrate measures of flourishing with those findings to see how spirituality and flourishing correlate among the University’s faculty.

“We’re all about cura personalis, care for the whole person, so I think this will really be an important thing to study in an institution such as ours,” he said.

He is also looking at the Spiritual Exercises of St. Ignatius Loyola as a tool for flourishing. The Spiritual Exercises are meditations, prayers and contemplative practices created by St. Ignatius for strengthening a person’s relationship with God that are often followed as a 30-day program. Father Cecero has been tracking participants on a flourishing scale as they move through the program to see which components of the exercises seem most related to flourishing.

“We make a lot of claims, and rightly so, that the Spiritual Exercises are a transformative tool for a person to achieve a new level of freedom in their lives and make good discernments. I would like to empirically validate that,” he said.

As the rector of Fordham’s Jesuit community, he uses the concept in the community’s retreats, as well as in workshops on “Flourishing as Clergy” that he delivers to broader audiences of Catholic priests. He has offered sessions on “Flourishing as Administrators” to Fordham deans and uses the concept in his part-time clinical practice to help patients overcome issues like relationship difficulties, vocational uncertainties, depression and anxiety.