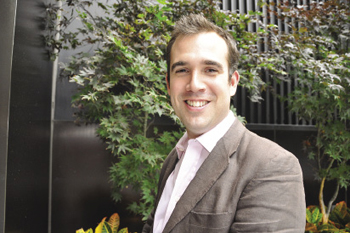 Alexander van Tulleken, M.D., will focus on the intricacies of conducting aid work in war zones, among other issues.
Photo by Patrick Verel

Van Tulleken has conducted aid work in Darfur, Russia, Peru and the Congo, and comes to Fordham from the University of Toronto, where he was a senior resident at Massey College.

He earned his medical degree in 2002 at Oxford, and completed a master’s degree in public health in 2009 at Harvard, where he was a Fulbright Scholar.

Van Tulleken attended the IIHA and earned an International Diploma in Humanitarian Assistance in 2005.

“I finished medical school; I worked overseas; and then I did my first mission in Darfur in 2005. By the time I returned, I realized that even as a qualified doctor, I needed more training in the business of delivering aid in camps in war zones.”

In his new role, van Tulleken will focus on four areas:

• teaching graduate students in the IIHA’s master of arts in International Humanitarian Action;

• reaching out to the University community for research possibilities in fields such as economics, anthropology, sociology and history; and

• researching the continuing changes in humanitarian aid, particularly the drive toward professionalizing aid and improving health care in war zones and after natural disasters.

The third area presents a special challenge, he said. In fact, reconciling political and apolitical action is one of the biggest issues facing aid workers.

“In Darfur, there has been no political solution, but along the way there has been an endeavor to feed, clothe and house people in a very temporary, rudimentary way. I’m trying to figure out if those two things can coexist, and how they do,” he said.

“The solution is essentially political, but along the way, you have a very apolitical engagement, where you say, ‘OK, rather than negotiating or taking a side, we’re just going to provide basic healthcare, shelter and food.’ You don’t ever solve the problem doing that, and yet there’s a great need for it.”

Further complicating matters, the professionalization of aid delivery—while nominally positive—comes with its own complications.

“The age of the amateur, which was really great for a long time, becomes problematic when you have an NGO worth half a billion dollars, when you have private security firms doing humanitarian aid work, or when you have an occupying power delivering aid,” he said.

Van Tulleken is well-versed in raising public awareness about global health, having made two documentaries with the BBC on the subject, as well as a series for the Discovery Channel calledMedicine Men Go Wild.

The show, which he made with his twin brother, Chris, sent him from the swamp forests of the Republic of Congo to the Arctic Circle in Russia. He’s well-acquainted with tuberculosis, malaria and HIV, as well as more exotic ailments such as “loa loa filariasis,” also known as the “African eye worm.”