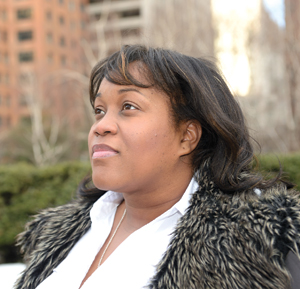 Binta Alleyne-Green remembers them well—the teenage girls, nervous and vulnerable, who walked into the health clinic with pressing questions about pregnancy, birth control, or sexually transmitted infections. Most were black. Almost always, they came alone.

“They were just so young, and they were inexperienced, and some of them were really scared,” said Alleyne-Green, Ph.D., who was volunteering at the teen clinic while pursuing her bachelor’s degree at Clark Atlanta University in Atlanta, Ga.

The girls weren’t too different from her, so she felt driven to understand their plight. She wondered: What did other girls know that these black girls didn’t? What, if any, support did they get from their parents? These and related questions launched her on the research track that she follows today as an assistant professor in the Graduate School of Social Service.

She focuses on the various influences on girls’ reproductive health decisions during their teen years, and on the decisions of black girls in particular. For one study, she’s investigating the manipulation, coercion, and violence that can arise in dating relationships to see how they affect girls’ decisions about birth control and pregnancy.

She is also investigating the role of fathers—or father figures—in curtailing risky sexual behaviors and dating violence among both girls and boys. Her hope, she said, is “that fathers are significant enough that they can reduce these incidents of violence and sexual risk, which can improve the quality of life for adolescents.”

For the study on manipulation and coercion, Alleyne-Green is conducting focus groups at a New York City social service agency. The focus groups have yielded some eye-opening findings, she said: For one thing, educating young people about birth control has its limits because girls sometimes find their better judgment overwhelmed.

“A lot of the young ladies said that at some point they would do anything to stop the fighting or to stop the hitting,” she said. “Some of them recalled feeling so powerless.”
Also interesting was that their abusive partners were young—high-school age—and had obviously learned this kind of manipulative behavior at an early age.

Alleyne-Green’s research showed that such vulnerability to abuse cuts across class lines. She recalled in particular one girl, 17, who came from an affluent two-parent family and went to good schools, but still found herself in a relationship with someone who hit her and humiliated her in front of others.

The girl couldn’t bring herself to tell her parents. “She felt ashamed: ‘My parents taught me better. They showed me what respect was, they don’t hit me, they don’t abuse me, but yet I turn around and I get with somebody that does, which goes against everything that I have been taught,’” Alleyne-Green said. “You could just feel what she’s feeling. It was just so heartbreaking.”

In future studies Alleyne-Green plans to explore whether survivors of dating violence have also been abused by their parents or guardians.

Alleyne-Green’s research on the role of fathers and father figures is a foray into a relatively new field, given that most research has focused on the peers’ and mothers’ influences on risky sexual behaviors and dating violence. To investigate this topic, she parsed data from the National Longitudinal Study of Adolescent Health, conducted by the Carolina Population Center at the University of North Carolina at Chapel Hill.

One finding so far, Alleyne-Green said, is that “the amount of activities that these adolescents are doing with their fathers or father figures doesn’t really impact their sexual risk behaviors or their dating violence,” she said. What has a significant impact, she said, is “how close they feel” to a father figure, particularly in the case of black girls.

Through future research, she hopes to get a better idea of how this finding applies to adolescent boys, she said—“If you have this father figure, how likely are you to be the one inflicting the pain and the hurt and the abuse?”

This and other nuances of the father-child relationship could inform new educational programs for fathers, she said. Ultimately, if her research warrants it, she hopes to design a program that shows fathers how to better engage with adolescents—“how to build trust so that you will then be a resource for that person, how to create a safe place (so that) your adolescents feel comfortable coming to talk to you about what may be going on in their life.”