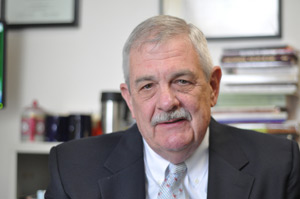 Frank Borchardt, FCRH ’65, GRE ’04, ’07, says he was called to serve the elderly on Long Island because they were losing contact with the church.
Photo by Janet Sassi

Borchardt, a University employee for 42 years, has worn many hats over the course of his institutional history, including research technician in biology, assistant dean and instructor of German. He is currently director of computer acquisitions for the IT department.

Now he will also be donning Fordham maroon, having earned his doctorate in pastoral theology from the Graduate School of Religion and Religious Education (GRE).

Borchardt has been practicing pastoral ministry for a long time.

“I started when I was about 17,” said Borchardt, a native of the Fordham section of the Bronx who attended All Hallows High School near Yankee Stadium. “My ministry has always been working with older people. I love doing that work; I have been taking care of the senior citizens homes in Glen Cove, Long Island.”

What motivated him to serve the elderly in nursing homes was what he saw as an unmet need for continued contact with the Catholic Church.

“In Glen Cove, we have about 1,000 elderly Catholics in homes, whose contact with the church is with whomever brings them communion,” Borchardt said. “They can attend Mass once a month and there is just one priest assigned to care for the spiritual needs of all these people.

In the mid-1990s, he began his religious training as a deacon at a seminary on Long Island. However, he found that he needed more specialized training to meet the needs of his parish, St. Patrick’s of Glen Cove, where he is one of three deacons and where he is being encouraged to do occasional sermons.

Borchardt enrolled in GRE just to see where the courses took him.

“Every course that I took was better and better,” said Borchardt, whose father, a physician, was a research fellow in the Department of Biology, and whose son, Lawrence, is an alumnus. “The courses have given me the attending skills to become a spiritual director—learning to listen, how to make eye contact or, at times, to simply say nothing and be present for someone.”

And there were other courses in liturgy that taught him the proper traditions of the church. “Being German, I would want to know the proper way of doing things,” he said.

He wrote his dissertation on pastoral care of Catholics in secular senior citizens homes. He then designed a new type of ministry that meets the needs of these elderly by offering a one-on-one relationship with church volunteers.

Starting with his parish, Borchardt is recruiting volunteers to train and befriend new placements in homes for the elderly.

“The first three to six months for most people who enter a home is a terrible experience; they need particular care,” he said. “Through the volunteer ministry, these people will feel God’s love and presence in their lives, and will not feel abandoned by the church.”

With his newly earned knowledge, Borchardt also hopes to enrich his homilies, which he gives at St. Patrick’s on a regular basis.

“My goal is that the parishioners leave Mass with at least one new thought to carry with them,” Borchardt said. “You can’t take the teacher out of me.”