skip to main content
Return to Fordham University
You are at:Home»Inside Fordham»Gingrich Sounds Off at Fordham Forum 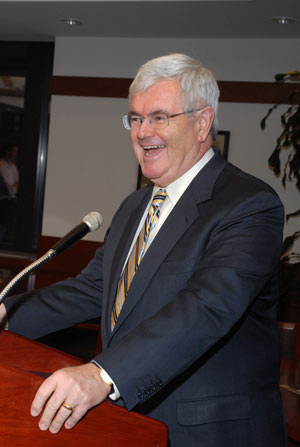 Newt Gingrich says that America has lost the courage to speak out on what is wrong.
Photo by Ken Levinson

Members of the Millennial Generation will be faced with enormous challenges in continuing America’s global dominance, Newt Gingrich said on April 20 at Fordham Preparatory School.

The Millennials—born between the late 1970s and the late 1990s—must foster a national dialogue about America’s economy, culture and place in the world, Gingrich told a crowd of nearly 2,000 people.

“As Americans, you must work to reassert the culture of American exceptionality, rebuild the economy and ensure that the U.S. is strong, and that our opponents are much more afraid of us than we are of them,” he said.

Gingrich is a former speaker of the House of Representatives and leading Republican who is rumored to be considering a presidential run in 2012. The event was held at Fordham Prep’s Leonard Theatre on the Rose Hill campus.

In his nearly 90-minute talk, Gingrich criticized President Barack Obama for shaking hands with Venezuelan President Hugo Chavez at the most recent Summit of the Americas in Trinidad and Tobago.

“There is something bizarre about an administration that is against using coal but bows to the king of Saudi Arabia and embraces the dictator of Venezuela,” said Gingrich, who started his speech praising Ronald Reagan for always speaking out on what he believed.

“We have lost the moral courage to speak out on what is wrong,” he said. “Moral language matters. Rendering judgment matters. It matters because, in the long run, cultures are led by words that have meaning.”

Gingrich said he was fascinated to watch a variety of “semi-dictators,” specifically, the leaders of Nicaragua and Argentina, lecture the president on what the United States is “doing wrong.”

“There aren’t many countries that have a net surplus of people leaving the U.S. to go to them,” Gingrich said. “If we have such a bad economy, if we do so many bad things, how come their people want to flee their country to come here?”

Gingrich also criticized the Obama administration, as well as the national media, for not focusing enough on national security.

“The world around us is really dangerous,” he said.

He emphasized his point by relating a scenario from a novel by William R. Forchsten—the same man who co-wrote Gingrich’s latest book. In the novel, a nuclear explosion triggers a massive failure of the nation’s power grid.

“The media doesn’t talk about things like this. These aren’t scare tactics, but the purpose of a national leader is to understand what could happen,” Gingrich said.

The media also missed the point of the various “tea parties” attended by many conservatives on April 15, he said.

“It wasn’t about taxes,” said Gingrich, who spoke at a New York City tea party earlier in the week. “It was about the fundamental question of the nature of America.

“This whole idea that Congress now randomly decides the right bonus—can you imagine a group less likely to make a reasonable decision?”

Earlier in the evening, Gingrich met a handful of students and professors at a reception sponsored by Fordham’s Center for Electoral Politics and Democracy.

When asked if anyone should be blamed for the economic strife the country is experiencing, Gingrich named former President George W. Bush and former treasury secretary Henry Paulson.

“They signed a $25 billion housing bill, a $700 billion Wall Street bailout and a nearly $2 trillion Federal Reserve guarantee—and that was all before Obama took office,” Gingrich said. “They created such momentum.”

At the informal event, Costas Panagopoulos, Ph.D., assistant professor of political science and director of the Center for Electoral Politics and Democracy, introduced Gingrich as a man “of strong principles and convictions.”

“Speaker Gingrich has routinely gone beyond the call of duty in his endeavors, a tradition he upheld in preparation for his visit to Fordham by converting to Catholicism three weeks ago,” Panagopoulos said in jest. “Although this was not a condition of our invitation, it is fitting that we welcome him to the Jesuit University of New York.”