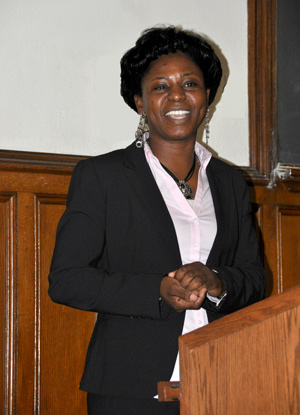 A Ghanaian-born entrepreneur visiting the Rose Hill campus on March 25 discussed how she found success in America.

Anna Kwakyewaah Pollard, who owns a medical supply firm in San Diego, gave her presentation at the close of Africa Week 2010. The festival included a health fair, film screening, lectures and performances that showcased African culture.

Kwakyewaah Pollard, a nurse who grew up in Liberia, said she began looking into owning her own business while working at a hospital.

“I always had a passion for helping others, but also saw an opportunity to get into an area that was potentially fruitful,” she said. Today, Kwakyewaah Pollard employs 20 people and has the potential to enter the New York market. But hers wasn’t an overnight success story.

“I had to apply for certification, get funding, find a good location, figure out marketing strategies and more,” she said. “Before I got final approval, I had to store supplies in a warehouse for nearly a year. That was tough—having to pay for storage in addition to my mortgage and other bills.”

Kwakyewaah Pollard often gives presentations on how to run a successful business at community events in California that are geared toward minorities. At Fordham, she highlighted statistics that put black-owned businesses into perspective:

• In the United States, black-owned businesses make up less than 5 percent of all companies.

• Black-owned businesses tend to start with less capital, and are four times more likely to be denied credit than are white-owned firms.

• In addition, African Americans are less likely to benefit from the multigenerational family and social ties that often lead to business partnerships among white-owned firms.

“So you can imagine that being African is a huge challenge,” she said. “I remember people asking me why I was opening a business. They said I already had a good job as a nurse. I told them I was doing this because we could do better for ourselves.”

Attitude is important, Kwakyewaah Pollard said. For example, when asked if her accent posed challenges, she said it was more of a benefit than a drawback.

“When people hear me speak, they ask where I am from,” she said. “Instantly we have an ice breaker.”

Kwakyewaah Pollard, who said she is the only woman who owns a medical supply firm in the San Diego area, offered encouraging words for women in the audience.

“You can do anything,” she said. “Take your time and put all of your effort into it. I’m living proof.”

The theme of Africa Week 2010 was “Culture and Democracy: Using Culture as a Tool to Enhance the Growth of Democracy in Africa.” The Department of African and African-American Studies sponsored the event with the African Cultural Exchange, a student club.