skip to main content
Return to Fordham University
You are at:Home»Inside Fordham»Generosity Shines at 2010 Founder’s Dinner 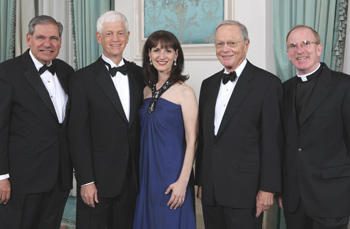 It was a night to honor stars and to bless Fordham’s lucky stars, as the University celebrated its ninth annual Founder’s Award Dinner on March 22 at New York City’s Waldorf Astoria.

“We are living through a particularly graced moment in Fordham’s grace-filled history,” said Joseph M. McShane, S.J., president of Fordham.

The president thanked Fordham’s supporters who, despite the economic downturn, have contributed more than $300 million toward Excelsior | Ever Upward | The Campaign for Fordham.

“With your continued affection and with your prayers, Fordham will remain what it always is—a place of perpetual springtime, a place where hope is born, talent is nurtured and the world is transformed one heart, one soul, one student at a time to the greater glory of God.”

The evening got off to a stellar launch with a video welcome from Academy Award-winner Denzel Washington, FCLC ’77, who is opening on Broadway this month in August Wilson’s Fences.

Father McShane joined Fordham Board of Trustees Chairman John Tognino, FCLS ’75, to present the awards. Bronx native Cunniffe, a Fordham trustee emeritus and current chairman and CEO of Vista Capital, LLC, said he and fellow awardee Gabelli were products of Fordham’s commitment to the American Dream.

“Fordham has had a tradition of educating immigrants, and Mario and I are central to that,” said Cunniffe. “We both had mothers who knew we had to be educated, so we wound up with the Jesuits for eight years.”

Cunniffe recently made a gift toward a redesigned student center, to be named in honor of his late wife, Jane.

“It is no more than 50 or 60 years ago that my folks were working in this hotel, so it’s wonderful to be here,” he said. 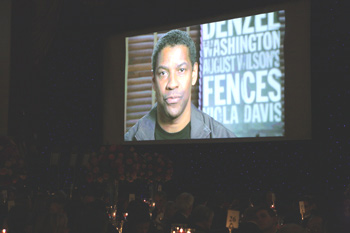 Gabelli said that, as children of immigrants, he, his wife, Pitaro, and long-term friend Cunniffe were all “very comfortable” accepting recognition from the Jesuit institution.

“What makes America great is education,” said Gabelli, who, like Cunniffe, grew up in the Bronx, attended Fordham Prep and Fordham and started his own business, “and the greatest educators [have been]the Jesuits—for 500 years.”

Gabelli also stressed the importance of faculty in his own education and in building a viable university.

“One thing about faculty, you never know where your influence ends,” he said. “I had several professors at Fordham who were very fundamental in my career.”

Queens native Pitaro earned her undergraduate degree in anthropology and worked as an archaeologist before earning an MBA at Columbia University. She is managing director for GAMCO Asset Management and serves on Fordham’s Board of Trustees.

“There is so much talent in this room,” said master of ceremonies Bill Baker, Ph.D., Fordham’s Claudio Aquaviva, S.J., Chair and Journalist in Residence in the Graduate School of Education. Baker introduced the remaining 11 Presidential Scholars to loud applause.

Rose Hill senior Habiba Jannat, a native of Bangladesh, said the scholarship “paved the way” for her to attend her first-choice school and to pursue her aspiration to be a doctor.

“It contributed so much,” said the commuter student. “It enabled me to concentrate on grades instead of on how to pay tuition.”