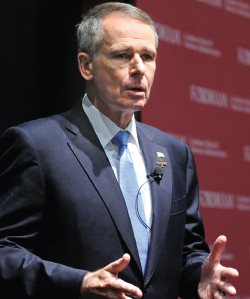 After 40 years of serving in the military, including two spent as the 16th chairman of the Joint Chiefs of Staff, Gen. Peter Pace, USMC (Ret.), has learned a thing or two about what it takes to be a leader.

He shared those insights on Sept. 24 at Fordham’s Lincoln Center campus, when he delivered the Graduate School of Business Administration’s Flaum Leadership Lecture.

Pace delivered “Leadership Biases,”a talk rich with anecdotes from his long and storied military career, to an audience that included a cohort of military veterans. He recalled how, as a second lieutenant serving in Vietnam, he radioed a commanding officer three times to ask which way he thought the patrol he was leading ought to be heading. Pace said that, upon his asking the question a third time, his commander responded with a string of curse words.

“I promised myself that if I ever got chewed out again, it was going to be for going too far. If you are in a healthy organization and you are a young executive, that organization expects you to push out [on your own]a little bit, to make mistakes. That’s how you learn,” he said.

He offered another example from 1972. While working on his master’s degree, Pace said he read about a young executive who’d lost $10 million for his company.

“The senior executives wanted to fire this guy [but]the CEO said something that I never forgot. He said, ‘Why would I want to fire someone I just paid $10 million to educate?’” Pace said.

“Now, if he makes the same mistake again, fine. But think about it. If you have subordinates who are honestly coming to work and doing their best, [even if]they’re making mistakes, that’s not all that bad.”

On July 30, 1968, a member of Pace’s squad was killed by a sniper while on patrol in Vietnam. Infuriated by his death, Pace said he called in an artillery strike on a village where he believed the sniper had fired from. His platoon sergeant shot him a look that made him reconsider—and sweeping through the village on foot, they found only women and children.

Pace said he didn’t know how he could live with himself today had his subordinate’s look not changed his mind.

“You will be morally challenged when you are the least emotionally prepared to deal with it. And if you don’t pick your anchor right now and decide who you are, morally you will not respond the way you want yourself to,” he said.