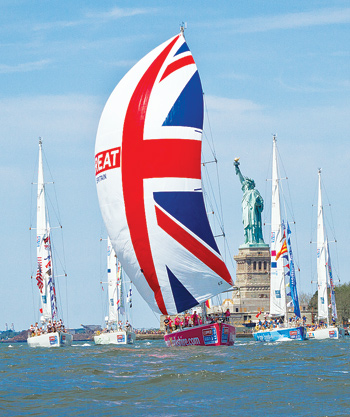 As the Clipper fleet passed through New York harbor, Fordham’s GBA announced a joint venture, World Program, with Clipper Ventures and others to teach global business skills through innovative means such as extreme sailing.
Photo contributed by Clipper Ventures

The official unveiling of “World Program,” a partnership between GBA, Clipper Ventures, Talent Q, Ashridge Business School, and Beijing International MBA (BiMBA) at Peking University, started with a visit to the North Cove Marina in Battery Park City to view the preparations for the Clipper Round the World Race, which was departing for the last leg of its 40,000-mile race around the globe.

The year-long circumnavigation, which draws 650 crew members from 41 nations, is meant to impart leadership and teamwork skills for business executives who have no sailing expertise. The World Program merges the experiential learning with cultural and academic awareness supported by a global network of partners, including GBA.

That visit was followed by a forum, “Business in the New World: The Relevance of Geo Politics,” held at NASDAQ Marketsite and hosted by GBA.

“As great as New York City is, and as great an asset as it is to be situated right in the heart of New York City, we have to recognize that the world is unfolding in very exciting, dramatic and even in some cases disturbing ways, and we are obliged to understand the world of business well beyond the comfort that is within the boundaries of New York City,” said David Gautschi, Ph.D., dean of the GBA. “In order to cooperate, we must have cultural sensitivity, and cultural sensitivity is the core premise of the World Program. This program will integrate our future business leaders into the business cultures of the world’s growing markets.”

Tognino noted that the most important asset any business has is its reputation. As a young trader at Merrill Lynch on Nov. 22, 1963, Tognino and colleagues said they immediately put in orders to sell when they found out that President John F. Kennedy had been shot. As a result, they made a windfall in the short period before the markets were shut down at 2 p.m.

This did not sit well with their supervisor, who demanded that they call back all the clients they sold to and cancel the trades. It was a lesson he said he has always taken to heart.

“There is no price on reputation,” he said. “We’re in a global marketplace. You can’t hide. What you do tomorrow in Shanghai, we’ll know immediately in New York, and based on that alone, you’ve got to protect each one of your reputations.”