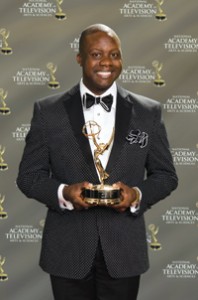 Clarence Ball and his Emmy.
Photo by Tommy Rozen

A documentary about the experience of African Americans in Tennessee during the Civil War earned Fordham business faculty member Clarence Ball an Emmy on Jan. 25 from the National Academy of Television Arts and Sciences.

Looking Over Jordan: African Americans and the War, a documentary produced in conjunction with Nashville Public Television, received an Emmy for outstanding achievement in the Historic/Cultural Program category for the Mid-South Region, which encompasses Tennessee, North Carolina, South Carolina, and Alabama.

A clinical instructor who teaches business communications to undergraduates, Ball worked with scholars from Duke University, Vanderbilt University, Yale University, Tennessee State University and New York’s Metropolitan Museum of Art on the project.
“I have always been fascinated with American history: more specifically, the periods leading up to the Harlem Renaissance,” he said.

“When I heard about the project, I was eager to find scholars who would tell stories of those nameless and often voiceless individuals who lost so much during and after the war.”

The documentary, which features in-depth interviews with Civil War scholars, historical reenactments, and music, illustrates the experiences of former enslaved persons on the road to freedom as they worked to rebuild families and rise above oppression and violence.

The documentary aired in February 2013 on WNPT (Nashville’s PBS affiliate) in recognition of Black History Month, and Ball and his team received the Emmy nomination in October. They received the award last month at the Schermerhorn Symphony Center in Nashville.

Ball said his experience sends an excellent message about the power of networking to business students at the Gabelli School. The offer to work on the documentary came about after he met executives from National Public Television at an industry event and shared his experience in documentaries from his years as a graduate student at Michigan State University. Within two days, he delivered his résumé and documentary reel. Soon after, he received a call to work on a project to commemorate the sesquicentennial of the Civil War.

The rest, as they say, is history.