skip to main content
Return to Fordham University
You are at:Home»Inside Fordham»From Gambia to Graduation, Father of Five Has His Day 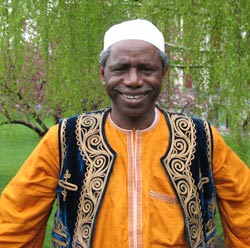 Omar Jawo was looking forward to his graduation ceremony from the New York Institute of Technology, where he had earned an associate’s degree. He went to work at his job downtown at the Bank of New York on what was a sunny autumn day, dressed to attend the diploma ceremony that evening.

“My ceremony never happened,” Jawo says. “Because it was Tuesday. nine-eleven.”

The horrific act that led to so many deaths at the hands of terrorists deeply disturbed Jawo, who is a practicing Muslim, and who couldn’t reconcile the acts with his religion. But it also primed Jawo to further pursue some tough educational goals that the Gambian-born father of five always wanted to—and still wants to—achieve.

Jawo is completing his bachelor of arts degree in social work at Fordham College of Liberal Studies, where he has been on the Dean’s List for three consecutive years and has earned membership in the Alpha Sigma Lambda Honor Society for Adult Students. For the past three years, he has risen early each day to teach autistic children at the Hawthorne County Day School in White Plains, and then headed back downtown to Fordham to take classes, usually 12 credits per semester. He calls himself a lifelong learner and says he is a voracious reader.

“Nothing bores me,” says the father of five children, ages 14 to 29. “I always say the brain is just like a nut on a bolt. If you don’t lubricate it, you know, it gets rusty. At the same time, I had kids who were going to college, and I wanted to be kind of a model to my kids.”

In Gambia, Jawo had been politically active and had worked managing a children’s program in rural communities in partnership with the Cooperative Movement, a Canadian non-governmental organization. He also studied social work in the United Republic of Cameroon. Following a military coup in Gambia, Jawo and his family received political asylum in the United States, arriving in 1997. Eventually settling in the Bronx, Jawo began to study computer technology, which he didn’t have a chance to study in Gambia. Jawo eventually decided to apply to Fordham, which further appealed to him because he had attended Catholic schools in Gambia, and was “impressed with Catholic training, which has discipline.” At Fordham, he was able to count some college credits from his schooling in Africa toward his degree, and is graduating with advanced standing.

His interest in social work, he says, is “congenital.”

“My dad was a traditional healer in herbal medicine, and people came from far and near to consult him in treatment,” he says. “I saw as a child how my parents were healing people, especially in lean years, when there was no food. So my interest in helping people is very deep. In America, being a social worker is more for the individual, and it is giving people intangible things, like counseling. But it can also be helping with tangible things, like helping someone who is lacking food and rent. Back home, we deal with communities and not individuals, like a whole village that needs food or medicine. As a social worker you work to get help for the whole group.”

Returning to Gambia to do such work, and to teach, is one of Jawo’s dreams. His eldest son is still there, and so is his family’s home. “I think my country needs people like me, who have the training,” he says. “The only politics I’ll get into now are the politics of helping people through education.”

But first, he wants to apply his advanced standing status to finish a master’s degree in social work in one year, right after his graduation.

And this time, for Jawo, the ceremony will happen.