skip to main content
Return to Fordham University
You are at:Home»Inside Fordham»From Ballet to Biomedical Engineering 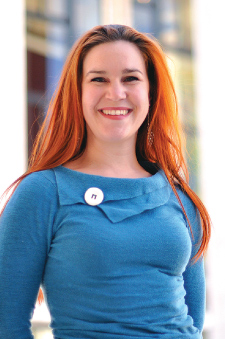 When Rachel Sattler moved to New York as a 21-year-old dancer, she landed in Williamsburg, Brooklyn, well before the cappuccino machines had arrived. She shared a four-bedroom apartment with four roommates that were officially on the lease, though that number sometimes ballooned to 10 people “paying various forms of rent.”

“I was living the dream,” she said.

Fresh from a two-year stint with the Sacramento Ballet and a year training and performing in Cannes, France, the young ballerina was indeed doing what countless generations of New York artists had done before her: roughing it. At night she worked as a cocktail waitress and during the day she auditioned and rehearsed.

When she returned from France, Sattler made the move to New York City in part upon the suggestion of her mother, who told her that her childhood home of Carson City, Nevada was too small for her after the eye-opening experiences in California and France. Both of her parents, Sattler said, trusted that she would eventually return to college to develop her substantial skills in math.

“I graduated the salutatorian of my high school, and then joined a dance company. Many relatives and friends said things to my parents like, ‘Agh, but she’s such a gifted student,’” Sattler recalled. “But my parents really supported me and told everyone that I’d get back to school when the time was right—and I did!”

Sattler is graduating with honors from Fordham’s School of Professional and Continuing Studies (PCS), and has been accepted at Columbia University to pursue a joint master’s/doctoral degree in biomedical engineering.

Four years ago, Sattler said that she found the Fordham PCS program through a Google search.

“When I first walked into Fordham and spoke to (Assistant Dean of Admissions) Glen Redpath, I could see that he understood dancers,” she said, adding that Redpath didn’t flinch when she expressed an interest in math and science.

She would, however, be required to take the common core—just like all undergraduates.

“At first I thought, ‘I’m an adult and I already know how to write,’” she said. “But I actually found the core classes very enriching and appealing to my artistic side. I know that if I had applied to a more technical school, I would’ve missed that the chances to further develop my analytical verbal and writing skills. Now, when I hear something on the news, for example, I am much better able to read between the lines and put the information in context.”

Sattler said that the field of biomedical engineering is still relatively new–one that was in its infancy when she was graduating from high school. So her timing of attending school later on, she said, turned out to be perfect. When she was younger, she assumed her dance experience would eventually segue into a career in physical therapy, but her future studies will now allow her to help people who need therapies in exciting ways—through prosthetic design, joint replacements, and tissue engineering.

“There are a lot applications for chronic diseases in biomedical research,“ she said. “For example, research into the natural ability for bones to remodel and adapt may lead to better treatments for osteoporosis.”

Sattler said that adapting is something that every dancer understands.

“As I approached 30 and my body was starting to change, I thought, ‘When I’m 40 or 50 will I be able to get up in the morning and still do this for my living?’” she said. “All dancers go through this transition. You put your whole life into something, but you’re still very young and you change.

Now, I can help do that for other people.”