skip to main content
Return to Fordham University
You are at:Home»Inside Fordham»Fordham’s Veteran Graduates on the Rise

When members of the class of 2012 gathered on Edwards Parade for Fordham’s 167th Commencement in May, scattered among the graduates were 58 “Yellow Ribbon” veterans.

The Yellow Ribbon cohort comprised the largest group of veterans to graduate from Fordham to date. 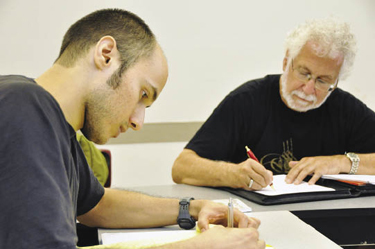 As part of Fordham’s initiative for veterans, a summer Veteran’s Writing Workshop runs through September, 2012 on two campuses. Here, Nelson Lowhim, left, who served in the middle east, and David Sandgrund, a Vietnam veteran, work on an in-class exercise.
Photo by Janet Sassi

“We’ve had student veterans graduate previously, but this is the first substantial graduating group,” said Michael Gillan, Ph.D., associate vice president at the Lincoln Center campus and co-chair of the FordhamVets Task Group.

In the last three years, the number of student veterans has steadily increased, owing to the 2009 launch of the Fordham University Veterans Initiative (FordhamVets), which offers services to help veterans transition from the military to college life.

Moreover, in the last year Fordham leapt from No. 55 to No. 34 in Military Times EDGE magazine’s national list of the top 100 “veteran friendly” colleges and universities—the only New York City university in the top 50.

“It’s not by accident that we became nationally ranked,” Gillan said. “We’ve prepared ourselves to do a good job with the veterans that come to us, and we’ve taken steps through publicity and other materials to let them know that we are prepared to welcome them when they arrive.”

The FordhamVets Initiative was established in response to the Post-9/11 GI Bill, which provides financial assistance and housing to veterans pursuing education. Included in the Bill is the Yellow Ribbon Program, through which colleges and universities can voluntarily fund up to 50 percent of tuition and fees not covered by the Bill’s basic provision of $17,500. The Department of Veteran Affairs then matches the school’s contribution.

Fordham contributes the maximum amount—50 percent—and also does not cap the number of veterans who can benefit from the program.

“Thanks to Father McShane, Fordham was one of the first universities to announce that it would participate in this Yellow Ribbon program to the fullest extent,” Gillan said. “It was from the onset an institutional commitment across a lot of offices and a lot of people to bring these young men and women to us, and has resulted in our being able to serve them well.”

Marco Bongioanni, who enrolled in the Graduate School of Education (GSE) after serving two tours with the Army in Iraq, said the program has supported him throughout his education at Fordham.

“Three years ago, I did not have the slightest idea that I would complete such a program,” Bongioanni said. “But Fordham gave me the tools and professional training to allow me to pursue a career helping other veterans.”

Bongioanni graduated with a master’s in education from GSE’s Mental Health Counseling program, which he will use to help others who have been in his position.

“I would like to work the veteran community, especially those suffering from post-traumatic stress disorder,” he said.

In addition to supporting students financially, FordhamVets runs various workshops and seminars to help veterans move “from desert to desk,” Gillan said. In the fall, GSE’s Human Resiliency Institute implemented Edge4Vets, a workshop series that draws on principles taught in the military to help veterans acclimate to student life.

Student veterans also have access to the Veterans Writing Project, a weekly workshop that assists veterans in writing about their experiences. Free of charge to all veterans, the workshops conclude in a publication of the participants’ writings. A public reading of the latest anthology, Afterwords: The Way Home, drew a standing-room-only crowd at the Lincoln Center campus on June 7. Another series of workshops are taking place this summer on the Westchester and Lincoln Center campuses.

“It’s another example of how Fordham goes above and beyond just helping veterans who are enrolled in the school,” Bongioanni said.

Despite arriving with some anxiety about adjusting to college, the veterans who passed through the program have thrived, Gillan said, and their experiences at Fordham have become a launching pad for further academic and personal growth.

“The change I see is in their sense of confidence in this undertaking and their sense that the sky’s the limit,” Gillan said.