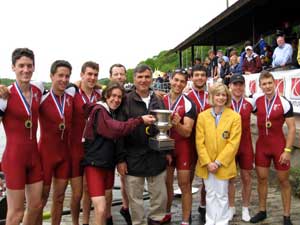 The men’s lightweight eight boat on Fordham’s crew team was ranked among the nation’s top collegiate crew powerhouses at several points during this past rowing season.

The boat was ranked sixth in the cMax collegiate rowing rankings that were released Wednesday, May 14. That put Fordham higher than traditional crew juggernauts such as Harvard (no. 7) and Penn (no. 10). Moreover, the boat was ranked no lower than ninth through June 4.

Then consider that the men’s team at Fordham competes as a club-level sport, unlike the varsity teams that dominate collegiate rowing.

“It’s a pretty big deal, because the other teams have all the resources in the world and spare no expense to try to have the fastest boats they can possibly have,” Fordham coach Ted Bonanno said.

The lightweight eight boat started the season unranked but won each of its competitions, including the prestigious Dad Vail Regatta in Philadelphia on May 9 and 10. That earned the oarsmen an invitation to the national championship on June 7 at the IRA Regatta in Camden, N.J., where they finished fourth in their heat.

The rowers have paid the price for such stellar performance, Bonanno said.

From the first week of classes last fall, the Fordham crew team dedicated itself to early morning practices six days a week. They traveled to Roberto Clemente State Park at 6 a.m. to begin prepping their shells, then took to the Harlem River for a full workout.

And those were the easy days.

“The training for the IRA Regatta is even more intense than during the school year,” Bonanno said. Because the rowers didn’t have commitments to classes, they practiced twice a day. It meant dedicating a large portion of their summer break to rowing.

Bonanno, who has been coaching men’s and women’s crew at Fordham since 1989, has a track record of success. His boats have medaled in the Dad Vail in 19 consecutive seasons and brought home 10 championships.

Fordham crew also has won a Division I National Collegiate Championship at the IRA Regatta under his tutelage.