Who he is
Director of Technical Operations at WFUV (90.7 FM, wfuv.org). 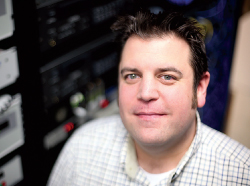 What he does
Evans basically keeps the radio station running, which includes servicing its transmitters, maintaining studio equipment, acquiring new technologies, and planning for those things that the station will need down the road as WFUV’s presence grows on the Internet and expands its audio and video offerings. He also occasionally fills in for DJs who are sick or unavailable and voices the station’s on-the-air underwriting announcements.

Background:
Raised in Hartsdale, N.Y., Evans worked at a radio station during his college years and taught radio production to fellow students. He attended Elizabeth Seton College in Yonkers, N.Y., and then Iona College, from which he graduated. He then worked at a few radio stations in Westchester County before coming to WFUV, where he has been for 16 years.

Hobbies/Personal:
His hobbies include music and computers—“a lot of geeky stuff”—but also one pursuit that allows him to leave it all behind: scuba diving. Since 2001 he has dived in the Caribbean, the Bahamas, and the Cayman Islands. “One of the best things about scuba diving is that you get to go underwater and you don’t take any of this stuff (electronic devices). All you’re thinking about is all the beauty around you—and how much air you have left.” He also enjoys spending time with his partner of six years and her four children, ages 6 to 13. “It’s wonderful. I’ve raised three of them since they were almost babies.”

Why he has stayed at Fordham and WFUV:
“I really enjoy the music that we play and also the teaching value that we provide to students. To me, we’re a unique radio station because of what we do and how we do it. If you hung out here for a week, you’d be amazed at the live music that we record and also how much the students are involved with that. It’s a professionally run radio station and it’s as real as radio gets. And yet we have about 75 students who work right alongside with the professional staff. Big-name artists come in here and you might see a student there at the controls doing all the mixing.

“We have students who grow so much. I’ve always been involved in the education of students, and it’s just something that’s really nice to see—bright young people who are driven to do something that they’re interested in.

“Besides that, I’m really happy to work at Fordham. It’s a wonderful place because of the community and the people. I’ve been lucky; in this business it’s hard to stay in one geographic area.”