skip to main content
Return to Fordham University
You are at:Home»Inside Fordham»Fordham Volunteers Reach Out to Those in Need 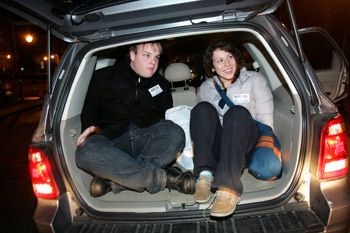 Members of the Fordham community pack themselves into a van to canvass neighborhoods in the Bronx for the annual HOPE count.
Photo by Bruce Gilbert

In the early morning hours of Jan. 26, the Grand Concourse in the Bronx was glazed with rain and dotted with occasional night owls, most on their way home from work.

But a few of them had no real place to go.

Although the Bronx has experienced a 72 percent reduction in homelessness since 2005, according to the New York City Department of Homeless Services (DHS), there are still roughly 35,000 homeless New Yorkers.

As in years past, Fordham joined with DHS and BronxWorks to conduct the 2010 Homeless Outreach Population Estimate (HOPE). From midnight to 4 a.m., some 120 Fordham students, faculty, administrators, alumni and DHS volunteers participated in canvassing several neighborhoods in the Bronx—including some of the largest homeless enclaves in the city.

It was the fifth year that the Fordham community has helped the city monitor its homeless population and gauge its outreach efforts. Information gathered on the 2010 HOPE count will be used to determine federal and state money to be allocated to New York and, more specifically, to each borough.

“It’s a human right to have shelter,” said Kelly Sosa, a senior in Fordham College at Lincoln Center (FCLC). “That’s why I’m here.”

FCLC senior Nathalie Jean-Baptiste agreed. “We pass homeless people every day but really don’t acknowledge them. Every New Yorker should do this. We would make the city a better community by acknowledging all those people who are a part of it,” she said.

While surveying the D Train platform, two volunteers spoke with a man who said he was not sure where he was going. They handed him a DHS outreach card with a number that would direct him to a 24-hour drop-in station offering a night’s shelter.

All HOPE participants were instructed to ask each person they encountered whether he or she would be willing to participate in a survey, and, if affirmed, whether that person had someplace they considered “home.”

“It’s a little awkward to ask, but you just have to do it,” said Dan Drolet, an FCLC sophomore who was on his second HOPE count.

FCRH freshman Kristen Flores, a native of Dallas, said that homelessness in Texas is a problem, but at a “different level.”

“Nowadays it’s easier to fall into a homeless situation than we think,” said Flores, a National Hispanic Scholar. “In this economy, it can be a matter of bad planning, or just bad luck.”

According to DHS, Fordham has consistently provided one of the largest HOPE volunteer bases of any New York educational institution. In fact, the Rose Hill campus is used as a training center for Bronx HOPE volunteers.

GSS student Frank McAlpin, a resident director in McMahon Hall, said he encouraged his residents to volunteer for the count, adding, “It’s a character-building experience to get into the community and work with those who are marginalized.”

According to Sandra Lobo Jost, director of Fordham’s Dorothy Day Center for Service and Justice, Fordham had so many volunteers this year that some had to be turned away. Citywide, some 3,000 volunteers participated in all five boroughs.

Lobo Jost encouraged volunteers to stay involved beyond one night, in the “spirit” of Dorothy Day.