skip to main content
Return to Fordham University
You are at:Home»Inside Fordham»Fordham to Break Ground on New Residence Halls 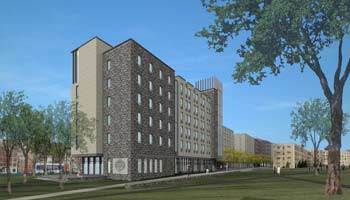 An architect’s rendering of new residence halls that are scheduled to open in June 2010.
Image courtesy of Sasaki Associates, Inc

Fordham will break ground on two seven-story residence halls on April 24. The buildings, each with two towers joined at the base, will rise on the southwest corner of the Rose Hill campus, in a space that is now a parking lot.

The southernmost residence (closest to the Walsh Family Library) will be known as Campbell Hall, named in recognition of Robert E. Campbell, CBA ’55, and Joan M. Campbell, whose December gift of $10 million to Fordham is among the largest in the University’s history.

The buildings will encompass 166,000 square feet (Campbell Hall will be the slightly larger of the two, at 90,000 square feet) and accommodate 460 students when they open in June 2010.

Marc Valera, associate vice president for facilities, said the buildings, which were designed by Sasaki Associates, Inc., will be built using energy-efficient lighting and construction materials, and will be certified by the LEED green building rating system. Discussions are underway about whether to include rainwater reclamation centers on the rooftops for use in irrigation and for mechanical systems.

The living spaces will be split into four and six-person suites, half equipped with single bedrooms and half with double bedrooms.

Valera said the aim is to combine the best aspects of dormitory-style living with those of apartment life. That means lounges on every floor that receive natural light from east and west, and landscaping that will accentuate the green space surrounding Martyr’s Court and the Walsh Family Library.

Michele Burris, associate vice president for student affairs, said the buildings, which will be the first new residence halls at Rose Hill since O’Hare Hall opened in 2000, will be configured specifically with juniors and seniors in mind, including kitchens in every unit.

“We administered a survey last spring with our housing community, and the most common request from our students was apartments with single bedrooms,” Burris said. “Juniors and seniors enjoy living with their friends, but they also like to have their own space. We have singles on the Rose Hill campus but none are located within apartments.”

Burris also noted that the buildings will have an integrated learning community seminar room that professors can use to teach classes.

“We’re still two years out, but we’ll be working very closely with academic affairs and campus ministry to come up with an integrated learning community concept that meets the needs of our upperclassmen,” Burris said.

To accommodate the construction, the guard booth at the Third Ave./Webster Ave. gate will be temporarily moved further east on Fordham Road, closer to the Walsh Family Library. The current entrance will be used as a construction entrance.