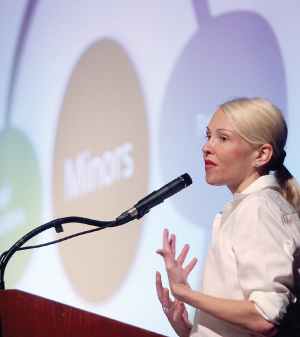 Can a text message be a form of consent for sex? What is the ideal seating arrangement for a hearing into whether one student sexually assaulted another? Should colleges offer students guidelines on how to limit their drink intake so as not to become incapacitated?

These were among the myriad issues discussed in a seminar on sexual misconduct at Fordham’s Lincoln Center campus on June 3.

The seminar, which was organized by the School Policy Institute and Fordham’s Division of Student Affairs, drew student affairs, security, Title IX, and other professionals from more than 36 colleges, high schools, and elementary schools.

Jeffrey L. Gray, senior vice president for student affairs at Fordham, said he was not surprised that the event had quickly filled to its 175-person capacity.

“These issues have never been more complex and have never before seen the level of scrutiny and public attention that they are now receiving,” he said, noting the recent passage by Congress of the Campus Sexual Violence Elimination Act and the White House’s convening of a task force to protect students from sexual assault.

“We understand that our work in this area will never be finished. The landscape is always shifting beneath our feet, and we believe that there is and always will be more that can be done.”

Katie Koestner, executive director of Campus Outreach Services and the Take Back the Night Foundation, was the seminar’s facilitator. Koestner, who was one of the first women to publicly discuss her experience with date rape for a 1991 cover story in Time magazine, led workshops devoted to four P’s: Policy Fundamentals, Response Protocols, Disciplinary Procedures, and Prevention Education.

Aided by a panel that included lawyers, a former member of the Manhattan district attorney’s office, and an expert on eating disorders, Koestner covered topics such as how to spot someone who might have been sexually abused, how to treat them afterward, the challenges of getting all the facts of their ordeal, and by what standard of guilt should the alleged assailant be judged. Also discussed was how to change the culture of a campus so as to head off these kinds of conflicts.

In many ways, Koestner said, things have improved. For a long time, rape was strictly defined as something that was done by force; saying “no” was in and of itself not enough.

“We’ve gotten to the point where . . . we hear conversations around coercion, how much emotional pressure can you put on someone to get them to give in, what happens when alcohol is involved, or other substances of incapacitation. We’re getting much more technical in the discussion,” she said.

Attendees participated in a mock interrogation of two “students” from the same college: “Erika” (played by Amanda Blaugher, assistant director of Residence Life at Penn State, Harrisburg) and “Jake” (played by Wayne Cole, a member of Campus Outreach Services.) “Erika” told the audience from the stage how “Jake,” a student who’d tutored her in calculus, had convinced her to go to a party, and how the next morning, she had no recollection that he’d had sex with her.

“Jake” explained that he’d escorted her to an upstairs bedroom to help her recover from having had too much to drink and that she’d consented to sex by leaning over from the bed at one point and saying “I’m ready.”

Attendees took turns playing the role of investigator to find out what really happened: Did Jake turn the lights down? Did Erika undress herself? How many Jello shots were consumed at the party?

Mark Brossman, a partner at the law firm Schulte Roth & Zabel, stressed the need for interviewers to be trained to be sensitive. Blaming the victim, even inadvertently, still happens.

“In approaching these investigations, it’s always important to step back and have an approach. You really have to plan and do work and spend time,” he said.

“We recommend you meet the complainant first, assure them you’ll take it very, very seriously, and inform them of the school policy.”

George Morrison, an associate with White and Williams, LLP, delved into the differences between “beyond a reasonable doubt,” “clear and convincing evidence,” and “preponderance of evidence.” The last one, which applies to college hearing settings, is satisfied when there is greater than a 50 percent chance that the alleged sexual misconduct may have occurred.

“Some of the consternation I think we’re feeling when it comes to all these laws, ordinances, and rules, is it’s starting to feel like the criminal justice system,” she said. “[Whereas] we thought we signed up to be educational institutions. We thought we were there to help kids learn how to make good choices.”

“At the end of the day . . . the job of this system is ‘How do we help our students learn from mistakes made, no matter how small, how big, [or]how many people they impact?’ And for every one of your institutions there’s going to be a line in which you say this person cannot be taught, does not deserve, and is not entitledto be in our community.

“That line is really important and has to be as clear as you can possibly make it in the eyes of all of the members of your community.”