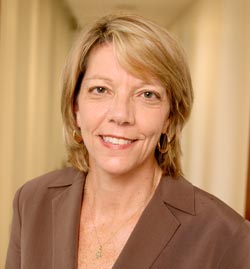 In social work, assessment is one of the most critical elements of the intervention process: Mary Ann Forgey, Ph.D., associate professor in the Graduate School of Social Service (GSSS), believes this passionately. So much so that she’s going to spend the next two years investigating it in the context of one of the world’s largest organizations: the United States Army.

Forgey, a full-time faculty member at Fordham since 1994, has a B.A. and M.S.W. from Boston College and a Ph.D. in social work from Columbia University. She has spent her time in the trenches having begun her social work career in 1979 as a front line child protection worker in Boston, and having worked as a civilian social worker for the U.S. Army Family Advocacy Program in Wiesbaden, Germany, from 1983 to 1987, coordinating child and spouse abuse programs.

In Germany, Forgey experienced one critical difference in family violence intervention between the military and the civilian world that would have an impact on her thinking about assessment: while both civilian society and the military require medical and other professionals to report suspected child abuse, the military has a mandatory reporting law for suspected spouse abuse, as well.

Because of the mandatory reporting requirement, social workers like Forgey end up assessing on a much wider scale. “You see a wide variety of patterns involving different levels of risk,” she said. And it is only in coming to understand the particular pattern of violence and associated risk factors through the assessment process that a social worker is able to respond effectively.

Now, as principal investigator of a two-year research contract from the Henry M. Jackson Foundation for the Advancement of Military Medicine, Forgey is bringing all of those threads together: her interest in the military, her expertise in family violence and her belief in the importance of proper assessment and thorough information gathering.

She is working to develop a new training curriculum in domestic violence assessment for Army social workers in the Family Advocacy Program. The three-day curriculum will be tested at Fort Bragg, North Carolina, and if found to be effective, disseminated to Army social workers worldwide through mobile training squads based at U.S. Army Medical Command in San Antonio, Texas.

Her colleague, Lee Badger, Ph.D., a professor at GSSS, will serve as co-investigator and will bring her expertise in standardized client training and evaluation methodology to the project. Research assistants from the GSSS doctoral and masters program will also serve as part of the Fordham research team.

The project will begin with the Fordham research team, together with a panel of eight civilian and military experts in domestic violence, reviewing and enhancing the Army’s own 1996 manual on spouse abuse assessment procedures, to ensure that it is current with the latest research on patterns of violence, risk factors, consequences and interview process techniques.

Following this initial phase, the team will develop a curriculum to train the social workers in the implementation of the enhanced spouse abuse assessment procedures. As part of the training, the Fordham team and expert panel will develop case scenarios involving a range of patterns of violence. Family advocacy practitioners from installations not involved in the study will also review the case scenarios to ensure that they are convincing representations.

Using standardized client methodology, in which actors play the parts of clients in case scenarios, the social workers will have the opportunity to practice what they are learning about the assessment process. The social workers will be videotaped throughout the training so that they can critique themselves as well as provide feedback to each other.

“The development of these scenarios is really critical,” said Forgey. “Everything will be videotaped, and the social workers will be able to talk to the standardized client afterward,” to get feedback on how thorough their interviewing technique really was, a luxury not afforded in the real world of social work. The videotaped interviews will also be used as part of the evaluation strategy to measure whether this method is effective in improving assessment skills. Based on the findings, the team will make revisions to improve the curriculum.

One of the panel members is Dr. René Robicheaux, the social work programs manager at Army Medical Command. He oversees about 380 civilian and military social workers, of which about 225 are employed in the Family Advocacy Program. A retired colonel who served for 26 years in the military, Robicheaux said his department handles about 10,000 reports of domestic violence each year; with 59 percent of the Army’s active duty personnel married, the percentages are roughly equivalent to those in civilian life.

The new training methodology will be a good thing, Robicheaux said, if “it will increase their interviewing skills so

are better equipped to reach for information that might not be forthcoming. … to pick up on what’s not being said.”

Assuming that the revised manual and curriculum are found to be effective, the Army’s social workers will participate in a training similar to the testing phase at Fort Bragg, with standardized client actors standing in for real clients. “What makes this training stand out is the hands-on, experiential nature,” Robicheaux said. “I’m thrilled because I think it has great merit.”