skip to main content
Return to Fordham University
You are at:Home»Inside Fordham»Fordham Scholar Driven to Seek Answers to the Eternal Question of Faith and Reason 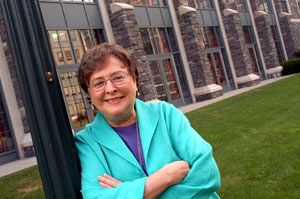 Elizabeth Johnson, C.S.J., was “always interested in religion” and has focused her scholarship on understanding how people view God.
Photo by Ken Levinson

Beginning in the late 1980s and continuing for 12 years, Fordham University theologian Elizabeth Johnson, C.S.J., Ph.D., took part in a Vatican Observatory-convened group of scholars and scientists who discussed such heady topics as chaos theory and the relationship between the mind and the soul.

To her friends and colleagues, it was no surprise that Sister Elizabeth, Distinguished Professor of Theology, would be a charter member of such a group, for as it turns out, she not only harbors a passion for understanding the theology of God as it plays out around the world, but for all things scientific.

“This might sound a little archaic,” she says in her native Brooklyn accent, “but I take my cue from Thomas Aquinas—the study of God and all things in the light of God. That articulates for me what theology is about.”

Johnson, who has been a member of the theology department since 1991, recently completed a yearlong research leave during which she wrote her eighth book, Quest for the Living God, which will be published in October by Continuum International Publishing Group. The book examines how God is conceived by contemporary Christian theology throughout the world. She is also teaching a graduate-level course on the topic this semester.

Chapters cover some of the topics dearest to Johnson, including the question of evil as examined through the Holocaust, God and women, and the debate over intelligent design.

The book is a continuation of what has long fascinated her: How people view God.

Sister Elizabeth has been cultivating her relationship with and appreciation of God since she was a girl, and by her teenage years knew a religious life beckoned. At age 17, she entered the Congregation of St. Joseph.

“I was always interested in religion, always asking questions,” she says. “So I ended up in a good place.”

Her curiosity extends to the seemingly eternal question of faith and reason, the subject of the Vatican panels. “Faith and reason should work together,” she says. “If there’s only one God, who made this one world, then there can’t be a contradiction between what faith holds and how science discovers how the world is working.”

The group, which met every two years for a week at a time, was made up of thinkers from all over the world. The goal, she says, was not to come to conclusions but to struggle with the questions.

“The idea is to keep talking,” she says. “Let this fertilize (our) thinking and teaching.”

For the week devoted to chaos theory, the group had access to an 800 number at the Center for Theology and the Natural Sciences at the Graduate Theological Union at Berkeley just in case they needed to reach out with queries. “This group did not avoid the hard questions,” she says.

Asking tough questions is what Sister Elizabeth does routinely. She is always asking new questions, reading new books, considering and evaluating new ideas. Her students, too, bring change to the classroom, each generation with its own experiences and attitudes. That’s what keeps teaching fresh for her.

She also has a rich life outside of the classroom. She’s an avid consumer of novels. Her secret pleasure is mysteries. Someone once told her theologians love mysteries because good usually trumps evil “and order is restored.” In the real world, it’s not quite so easy, she says ruefully.

Her interests outside the classroom help to balance her many professional commitments. She recently served as president of the American Theological Society, and has been member of the National Lutheran-Catholic Dialogue, a consultant to the Catholic Bishops’ Committee on Women in Church and Society, a member of the Vatican-sponsored study of Christ and the world religions, and a committee member of the Common Ground Initiative to reconcile polarized groups in the church.

She also serves on the editorial boards of three theological journals.

Teaching is a particular passion, though. “It gets me kind of crazy that people take advanced courses in many other subjects,” she says, “and stay at a very childish level when it comes to God.”

Her own understanding of God continues to evolve. She would now describe God, if asked, as “a mystery of plentitude that’s beyond our imagination.” Johnson is known to use the feminine in speaking about God, and it is quite deliberate. As a Catholic and a woman, Sister Elizabeth is particularly sensitive to women’s struggles for equality both in society and in the Catholic Church.

In fact, she has devoted a great deal of time to understanding feminism and theology. She is the author of She Who Is: The Mystery of God in Feminist Theological Discourse (NY: Crossroad, 1992) and The Church Women Want: Catholic Women in Dialogue (Crossroad, 2002), as well as many articles on the subject.

Sister Elizabeth is convinced that both religion and culture must change in order for women and men to be truly equal. “Men can’t be fully human until they’re in full partnership,” she says.

Having completed her theological studies at a time when women needed the support of a religious community to advance in the field, Johnson is pleased to see so many lay people, and so many women, taking up theology.

“Most Catholic women I know today have struggled with their place in the church,” Johnson says, yet she does not entertain the thought of ever leaving it. There is too much richness in its spiritual tradition. “It’s worth fighting for,” she says. “That’s my field of struggle, my profession.”