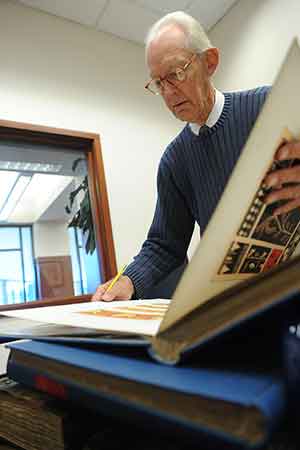 Father Bertels at the library in 2008
Photo by Chris Taggart

Henry J. Bertels, S.J., whose love of the written word took him to the Pontifical Biblical Institute Library in Rome and to Fordham, where he was the University’s cataloguer of rare books, died on Dec. 26, at Murray-Weigel Hall, in the Bronx.

A native of Jersey City, New Jersey, Father Bertels attended Dickinson High School and the School of St. Philip Neri in Boston, where he studied Latin. He entered the Society of Jesus in 1950.

He was ordained a priest by Francis Cardinal Spellman in the Fordham University Church in 1963. After completing his final year of study in Belgium, he returned to the Fordham Jesuit community to reside while earning a master’s degree in library science at Columbia University.

In 1970, he became the librarian at Woodstock College, a Jesuit seminary in Baltimore, Md. When the college closed in 1975, Father Bertels oversaw the relocation of the main library collection to Georgetown University, where he remained until 1982.

A yearlong sabbatical was followed by an appointment as librarian for the Pontifical Biblical Institute, a position he held until 2002. He returned to Fordham that year and served as a both a full-time and part-time assistant librarian, until 2012.

“I know the Fordham family joins me in mourning Father Bertels,” said Joseph M. McShane, S.J., president of the University. “He rests with our Lord now, leaving us all a little poorer in spirit and in wisdom. I will miss his acuity and wit and fellowship, as will his colleagues in the library, and everyone who knew him.”

In 2009, Father Bertels helped curate the exhibit, “The Papers and Memorabilia of Avery Cardinal Dulles, S.J.,” in the exhibition hall of the William D. Walsh Family Library. The exhibit featured 70 volumes of the cardinal’s books. Patrice M. Kane, head of archives and special collections at the library, said Father Bertels’ Jesuit background was vital to understanding the collection.

His experience was also critical when negotiating prices with rare book dealers and building the libraries’ special collections.

“Father Henry was a delight to work with during the 10 years he was at Walsh Library. His upbeat personality was contagious, and the library staff were very fond of him,” she said.

When Woodstock closed, many of the books in the collection there were dispersed to the Jesuit colleges and universities around the area, including Fordham, where he would encounter them again, along with handwritten notes initialed “HJB’.

“He would revise the cataloging of our rare volumes, and it was not unusual to hear him laugh and say ‘Isn’t this something!’” Kane said.

“Henry was a great archivist, a great cataloger and a great friend. We really miss him.