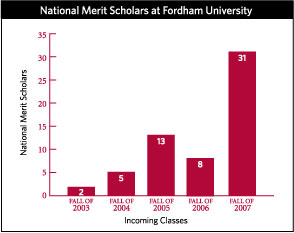 Thirty-one National Merit Scholars were among the 1,700 freshmen who arrived at Fordham this past fall—setting a new record for the University and ranking this incoming class among the best nationally.

Fordham received the news in January from the National Merit Scholarship Corporation, which released the data in its 2006-2007 annual report. The figure represents a significant increase from the fall of 2006, when eight merit scholars enrolled as freshman, and the fall of 2005, when 13 chose Fordham as their university.

Every year, the National Merit Scholarship program selects 8,200 winners from roughly 1.4 million high school students who take the Preliminary SAT. Fordham’s incoming class of 31 winners is 65th in the country for the highest number of National Merit Scholars, and behind only Georgetown and Notre Dame among Catholic universities.

Peter Farrell, director of undergraduate admission, said that 26 of the winners, who generally represent the top 10 percent of their graduating high school classes, were given full scholarships. He credited the high merit scholar enrollment total on outreach by the admission office and the deans’ offices.

“Every year, we work very hard to recruit these students,” Farrell said. “They have the greatest amount and breadth of college options, so they’re extremely sought after.”

Joe Lama, a freshman merit scholar from Staten Island studying pre-med at Fordham College at Rose Hill, said he was drawn to the University because his experience at Xaverian High School in Bay Ridge, Brooklyn, made him want to stay in New York City at a Catholic school.

He said it didn’t hurt that Fordham also reached out to him two weeks before his high Preliminary SAT score was released. Many of Lama’s friends already were planning to attend Fordham, and when he visited the Rose Hill campus, it sealed the deal.

“To have a campus in New York City puzzled me; it was unbelievable,” he said. “I really wanted something with a campus feel, and no one has that, not even Columbia.”

The University’s record number of National Merit Scholars comes almost a year after it set a record for the number of students receiving Fulbright fellowships. The Fulbrights, which were announced last May, went to five graduate students and three undergraduates.

John R. Kezel, Ph.D., director of the Campion Institute of Prestigious Fellowships, said that number put Fordham second in Jesuit schools only to Boston College, and that his office is hoping to reach double digits when the awards are announced this spring.

“I remember 20 years ago when I was in the dean’s office, we weren’t getting any Fulbrights, and if we got one or two we were happy,” he said. “I think as the student body is improving, we’re getting better applicants.”