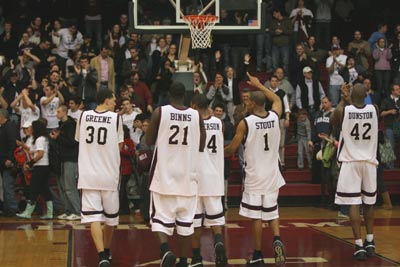 It wasn’t the way they wanted it to end, but it ended nonetheless.

The college basketball careers of five Fordham seniors: Kevin Anderson, Michael Binns, Bryant Dunston, Sebastian Greene and Marcus Stout, drew to a close on March 12 with the Rams’ 80-62 loss to Saint Joseph’s in the Atlantic 10 tournament.

Though their final game didn’t turn out as they envisioned it, the players can look back at their Fordham years and realize that they left the basketball program in much better shape than they found it.

When the seniors arrived as freshman in the fall of 2004 as head coach Dereck Whittenburg’s first full recruiting class, Fordham was coming off a 6-22 season. They hit the ground running, helping the Rams improve to 13-16 in their first season, 8-8 in the Atlantic 10. Dunston earned Atlantic 10 Rookie of the Year honors.

The Rams took off the following winter, finishing 16-16 with a 9-7 conference mark. They beat Virginia, becoming the third Atlantic 10 team to win at an ACC school since 1995-96, and advanced to the semifinals of the Atlantic 10 tournament.

Last year, Fordham notched an 18-12 record, the Rams’ first winning season since 1992, along with a 10-6 conference tally. They finished the regular season tied for fourth; the Rams’ best finish in the Atlantic 10.

“This group of seniors restored a lot of pride to the Fordham men’s basketball program,” Whittenburg said. “We asked them to do a lot, and even though we didn’t accomplish what we set out to do this year, I’m really proud of these guys for how far they’ve taken the program.”

Kevin Anderson is a four-year starter who has been a defensive presence. He appeared in all 120 games played over the past four years. He usually was assigned to guard the opponent’s leading scorer while running the offense from his point guard position. He amassed 369 assists and 158 steals, both top 10 in Fordham men’s basketball history, while scoring 414 points.

Michael Binns is a four-year member of the squad who appeared in 113 games, recorded 476 points, connected on 53 three-pointers and grabbed 337 rebounds.

Sebastian Greene served the team as a sixth man before moving into the starting lineup in 2007. He also appeared in all 120 games, netted 746 points, shot almost 50 percent from the field and recorded 498 rebounds, 92 steals and 63 blocks. After becoming a starter, he responded by averaging 9.5 points and 5.5 rebounds per game.

Marcus Stout is one of the top three-pointer shooters in Fordham men’s basketball history. In 120 games, he connected on 259 three-pointers, good for second place on the Fordham all-time list. In 2007, he became the 32nd Ram to score more than 1,000 points, graduating in sixth place on the career scoring list with 1,709 points. He was named First Team Preseason All-Atlantic 10 this year, led the squad in assists and tied for the team lead in steals.

Bryant Dunston is one of the most prolific players in Fordham men’s basketball history. A four-time All-Atlantic 10 selection and the 2005 Atlantic 10 Rookie of the Year, Dunston will graduate with his name prominently displayed in the Univeristy record book. In 2007, he became the 31st player at Fordham to score more than 1,000 points and is the second all-time leading scorer at Fordham with 1,832 points. He also ranks fourth on the school’s all-time rebounding list with 993 career boards. This season, he led the Atlantic 10 in rebounding and recorded a league-best 15 double-doubles.

The Rams will have a new look next year as four freshmen will build on the solid foundation left by this year’s senior class. The newcomers include two sets of high school teammates—Jio Fontan and Alberto Estwick—who helped St. Anthony’s (N.J.) to an undefeated season and the New Jersey state title, as well as a no. 1 national ranking by USA Today.