skip to main content
Return to Fordham University
You are at:Home»Inside Fordham»Families of Political Violence Strive for Peace, Justice, Forgiveness 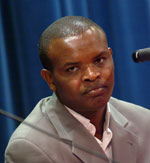 The Rev. Romain Rurangirwa of Rwanda discussed the importance of peaceful
sacrifice in the wake of tragedy.
Photo by Chris Taggart

While the September 11, 2001 attacks in the United States are the most poignant in the minds of New Yorkers, other international tragedies form part of a larger spectrum of those who have suffered at the hands of political, ethnic or religiously-motivated violence. As part of Fordham’s effort to commemorate the 9/11 attacks, a panel discussion, “War or Peace: Drawing Hope from Tragedy,” was held in the Flom Auditorium at the Rose Hill campus on Sept. 8.

Sponsored by the Office of the Vice President for University Mission and Ministry and the September Eleventh Families for Peaceful Tomorrow, the event featured panelists representing Algeria, Rwanda, Spain, the United Kingdom, and the United States.

Patrick J. Ryan S.J., vice president for University Mission and Ministry, moderated the event, which began when Cherita Kheddar of Algeria tearfully recalled the memory of Islamic terrorists raiding her home and torturing and killing her brother and sister. Coping with that pain prompted Kheddar to encourage people around the world to value human dignity and truth.

“There have been over 100,000 victims of terrorism in Algeria,” said Kheddar. These people only wanted to be a part of a civil society. This is the price [of]terrorism today.”

Losing her family to Islamic extremists led Kheddar to found “Our Algeria,” a 5,000-member organization that opposes global terrorism. The group offers psychological and legal aid to victims’ families.

It is often the young and innocent who pay the heaviest price. “I don’t want to see more children suffer,” said Kheddar. The only way to defeat acts of mass murder is to spread peace and understanding, she said. 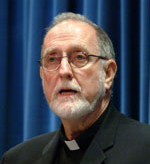 Another representative of Africa, the Rev. Romain Rurangirwa of Rwanda, also discussed the importance of peaceful sacrifice in the midst of adversity. In 1994, Father Rurangirwa’s entire village and family were murdered during the horrific Tutsi/Hutu genocidal violence.

“One moment they were here, then I closed my eyes and they were gone,” said Father Rurangirwa.

According to Father Rurangirwa, he and his childhood friends were unaware of conflicts with other ethnicities until 1972, when his oldest brother’s school was attacked by extremists (his brother was tortured and killed). Years later, after the mass murder of his fellow villagers, Father Rurangirwa said he became confused about the meaning of life, and unsure what he should do. Rather than withdraw from society, he instead found motivation to help those in need. Part of his inspiration came from a motion picture.

“In the movie Sweet November a woman helped someone in order to stay alive,” said Father Rurangirwa. “She helped herself through helping others.”

Other panelists included Jesus Abril Escusa of Spain, who lost his 19-year-old son Oscar in the March train bombing in Madrid, and Orlando Rodriguez, Ph.D, professor of sociology and anthropology at Fordham, whose son Gregory died on 9/11.