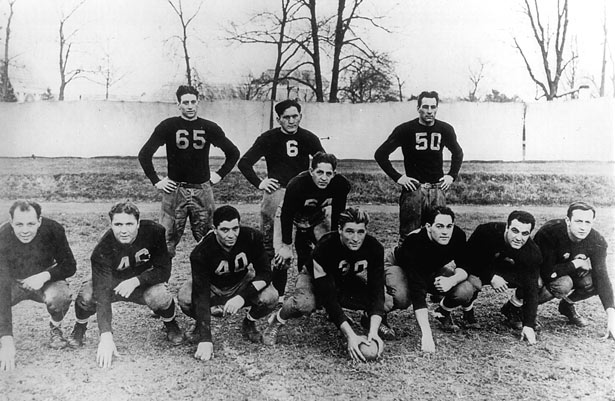 “Handy” Andy Palau (with hands on knees) was the quarterback on the Fordham football teams that featured the
Seven Blocks of Granite.
Photo courtesy of Fordham University Archives.

Andrew Palau (FCRH ’37), who was Fordham University’s quarterback behind the vaunted Seven Blocks of Granite in the mid-1930s, died on Sept. 1. He was 93.

Palau was an outstanding athlete in high school and at Fordham. Nicknamed “Handy Andy,” he led Bristol (Conn.) High School’s football team to its only undefeated season and captained the basketball team to a state championship. At Fordham, he earned All-America honors in football and was a catcher on the baseball team, signing with the New York Yankees in 1937. In his senior season, Palau helped lead the Fordham football team to its last undefeated season at 7-0-1 and a number three national ranking.

“We have a very proud tradition at Fordham and Andy was an excellent example of that,” said Frank McLaughlin (FCRH ’69), executive director of athletics. “It’s sad because all of the Seven Blocks of Granite have passed away and now Andy has died. We try to tell our student athletes that they have a responsibility to represent Fordham and all those athletes who played before them and Andy was certainly one of those who helped build that tradition.”

One of Palau’s claims to fame was that he gave his former Fordham teammate Vince Lombardi (FCRH ’37) his first coaching job. Lombardi, who would go on to coach the Green Bay Packers to the first two Superbowl championships in the fledgling National Football League, was one of the Seven Blocks of Granite, the dominating group of linemen who helped the Rams become a football power.

In 1939, Palau (pronounced PAY-low) was hired to teach mathematics, physics and physical education and coach football and baseball at St. Cecilia High School in Englewood, N.J. Palau then hired Lombardi as his assistant. He and Lombardi shared a boarding-house room across the street from the school for $1.50 a week.

Palau would join the Fordham football team in 1942 as an assistant coach, and Lombardi would do the same a few years later.

Palau eventually returned to high school teaching and coaching and would become a principal in Connecticut. In 1971, the former quarterback and catcher was selected as Bristol’s greatest athlete of all time. In 1976, Fordham inducted him into its Hall of Fame.