skip to main content
Return to Fordham University
You are at:Home»Arts and Culture»Professor’s Book Highlights Media’s Role in Shaping View of Refugees
Panelists Robin Andersen, right, with Adama Dieng, center, and Purnaka de Silva, left
According to the United Nations, “one in every 122 humans is now either a refugee, internally displaced, or seeking asylum,” with over 20 million refugees currently fleeing violence and conflict.

How the world receives its information about such crises is a central concern of contemporary humanitarianism. At a lively book launch held at the United Nations bookshop in New York on Dec. 7, Robin Andersen, Ph.D., 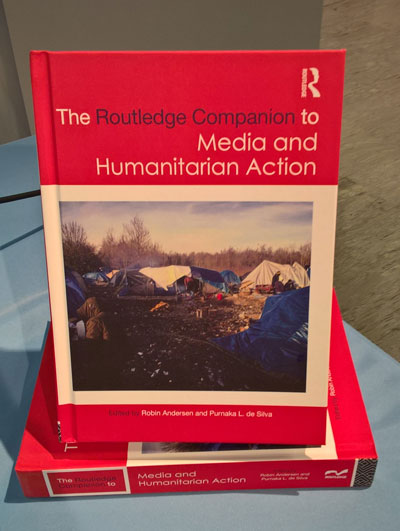 professor of communication and media studies, celebrated the publication of The Routledge Companion to Media and Humanitarian Action (Routledge, 2017) co-edited by Andersen with Purnaka L. de Silva.

Andersen said her book presents a comprehensive analysis of how mass media portrays humanitarian crises, and a call for a renewed “ability to perpetuate a humanitarian imagination” through “the ethics of solidarity.”

Andersen and de Silva were joined at the launch by U.N. Undersecretary-General Adama Dieng, who spoke about the importance of mass media in a world that has seen a rise in xenophobic nationalism and violence towards immigrants and refugees.

According to Andersen, media holds immense power over the narratives of humanitarianism; it has the ability “to shape how we view victims of disaster, whether worthy or unworthy, innocent or guilty.” Part of the new book’s specific mandate, said Andersen, was to “help ensure that everyone, victims included, has a seat at the table when discussing humanitarian policy,” and that the dispossessed and the displaced “are represented in their full humanity.”

“There is a need to highlight peace journalism,” Andersen says, “which does not enter into our media frameworks very well, since belligerencies grab headlines.” With better media practices, “refugees fleeing war-torn countries could be viewed as like us, and brought into our communities.”

The need for better models of how media covers humanitarian crises has never been more obvious, she said. The election of Donald J. Trump has come with “a narrative that challenges the basic assumptions of the humanitarian imagination” and denies the “affirmation that when confronted by the representations of the suffering of those in need, we are compelled to act in solidarity with them.”

With 61 contributors writing on topics ranging from “Compassion as a News Value” to “Global Activism on Facebook,” Andersen said the Companion will serve as the essential reference resource for professionals both working in the field and setting policy. The book’s essays come from an internationally diverse body of contributors that includes journalists, administrators of NGOs, academics, researchers, and physicians from all over the world.

The book launch and discussion was live-streamed on the U.N. Facebook page.