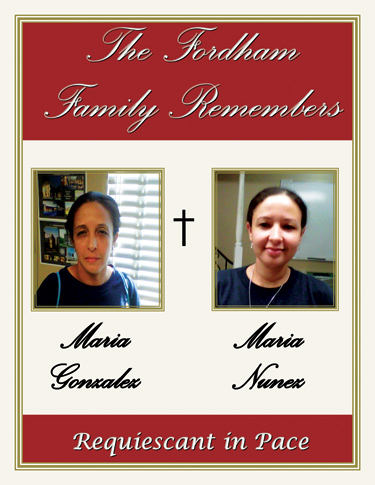 Maria Gonzalez and Maria Nunez, in a poster created for the University Mass.
Poster courtesy of Campus Operations

Maria Gonzalez and Maria Nunez were both exceedingly shy when they started work in the University’s Custodial Services Department.

The two sisters had begun as part-time employees on a roughly 115-person Rose Hill campus crew—Nunez, 39, a mother of two young daughters, in December 2006, and Gonzalez, 45, the mother of two boys and a daughter, in March 2007.

But they also cultivated an extended family on the Bronx campus, where they cleaned classrooms, offices, the WFUV studios, and other University facilities.

And so their deaths in an automobile accident on the nearby Bronx River Parkway on April 29 prompted unbridled grief across the 85-acre campus.

“It really broke my heart,” Gerardo Galiano, who worked alongside both women before becoming a supervisor of the Custodial Services Department’s Campus Operations. “I can’t imagine [that]all the matriarchs in this family are gone.”

A few days after the sisters’ deaths, the University established a fund on behalf of both families. As of June 1, more than 225 donations have come in, totaling just over $21,000, said Dorothy Marinucci, executive assistant to Joseph M. McShane, S.J., president of Fordham.

The vast majority were sent by people with no connection to the University, said Linda Rose Farrugia, senior executive secretary in the president’s office.

“The letters come from all over the country. They bring tears to your eyes,” she said. “Our employees touched the depths of people’s souls.”

Contributions ranged from $1 to thousands of dollars. Two one-dollar bills came wrapped in a tiny ribbon with a note that simply said, “I wish I could do more,” she said.

The fund will be divided equally between the survivors of the two families. Gonzalez left behind her husband and two boys, the older of whom she had hoped might attend the University. Nunez is survived by her husband.

Galiano said both women brought much camaraderie to the workplace, and beyond.

“They helped create that atmosphere itself,” he said. “We were coworkers but we were all really good friends.”

Weekends brought frequent invitations to Gonzalez’s home in the Bronx’s Soundview neighborhood, where she would prepare a feast of ribs, hot dogs, burgers and rice and beans, said Robert Freda, director of Custodial Services.

“People started to refer to them as Maria’s Barbecue,” he said.

Galiano recalled that when Gonzalez was promoted to full-time in August, she threw one of the trademark barbecues to celebrate. At it, she used the occasion to thank her coworkers and supervisors.

“We remember thinking that this woman was thanking us for her achievements, for a job that she merited and deserved,” Galiano said.

“They were very good-hearted people,” Lucero said. “They always gave me life advice.”

Jolene Santana, a member of the custodial crew since 2005, said that Gonzalez worked hard for a full-time spot so that her son might attend Fordham—one of the benefits available to full-time employees.

“She lived in here, for overtime,” and took pride in her effort, Santana said.

The sisters, Santana said, were jovial, and very supportive. “When something went wrong they would let you know that it’s going to be all right.”

A May 1 memorial service at the University Church drew some 700 mourners, including the sisters’ families, colleagues, students and administrators.

“These two women had a great impact on most of the people in the department,” Galiano said. “Their friendship was invaluable to everyone here.”