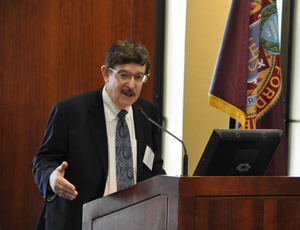 Eric Nadelstern says the city must move its high school graduation rate from 64 percent to 80 or 90 percent.
Photo by Patrick Verel

Eric Nadelstern came to Fordham’s Lincoln Center campus on March 19 with a message for a full audience of principals:

Change is here to stay, said Nadelstern, the chief of schools for the New York City Department of Education. This comes despite the increase in citywide graduation rates from 50 to 64 percent.

“The system we currently work in is perfectly designed to graduate 60 percent of the students we serve. It will not allow us, given the way we’re structured, to do any better than that,” he said.

“We can’t get to 80 or 90 percent universal high school graduation by tinkering around the edges with incremental reform,” he continued. “Incremental reform is the enemy of success.”

Nadelstern was the keynote speaker for “The Changing Landscape of Public Education: New Challenges and New Opportunities in Urban Education,” a conference staged by the Graduate School of Education. It focused on 10 items that the Department of Education had learned over the last eight years.

The issue of accountability loomed large. It factored into the department’s decision to create a leadership academy for new principals and replace large underperforming high schools with new smaller ones.

In addition to investing in leadership, rewarding success, transforming schools into centers for community and partnering with the private sector, Nadelstern noted that another lesson of the last eight years has been the value that small schools place on teachers’ development.

“If we’re serious about principals as instructional leaders, then the number of teachers in a school represents that principal’s class,” he said. “If the principal is going to work with his or her class the way we expect teachers to work with students—doing everything they can to understand where a teacher is on a developmental continuum and then figuring out strategies and activities that the individual needs—then the faculty can’t be too large.”

Looking to the future, Nadelstern said the focus would be on increased student achievement, more school closings, improved accountability and expansion of school choice. Referring to the last item, he noted that it is deplorable that the zip code someone is born into is directly correlated to whether that person will graduate from high school.

“Of all the things I’ve mentioned today, that’s the hardest thing to accomplish in this city, but we will not have succeeded unless we do.”

A very different take on school reorganization emerged from respondents at a panel that followed Frank Macchiarola, Ph.D., chancellor of St. Francis College.

The panel, whose members included Leo Casey, Ph.D., vice president of academic high schools at the United Federation of Teachers: Ernest Logan, president of the Council of Supervisors and Administrators; and Sheila Evans Traunumn, former associate commissioner for the New York State Education Department, criticized the way they said the DOE has changed standards used to hold principals accountable.

He also characterized school closings as a form of urban renewal.

“If you had a teacher in your school who stood up in front of his class the first day of school and said to his students, no matter what you do, no matter how you perform, 5 percent of you are going to fail, what would you say about that teacher?” he asked.