skip to main content
Return to Fordham University
You are at:Home»Inside Fordham»Distinguished Scholar Focuses on Religion, Reason and Faith 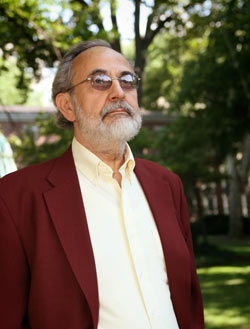 Rev. M. Westphal, a Presbyterian minister, met Florence Bleecker, a missionary working in China, when she was sent back to the United States after having contracted malaria. Their son, Merold Westphal, Ph.D., Distinguished Professor of Philosophy at Fordham University, has come to think that he therefore owes his existence to “a Chinese mosquito.”

As it turns out, reasoning about existence is what Westphal has spent much of his professional life doing. An author of nine books and nearly 200 essays, he is among the leading scholars of continental philosophy, a corner of the field that focuses on an array of 19th and 20th century philosophers from mainland Europe.

His scholarly pursuits include the hermeneutics of suspicion, an ominous-sounding phrase that refers to the study of theories about the interpretation of texts (hermeneutics) whereby the interpreters project their own wishes onto the texts. Given that the most “suspicious” of philosophical interpreters are the atheistic ones—Karl Marx, Friedrich Nietzsche and Sigmund Freud—it might come as a surprise that Westphal approaches his work from a Christian perspective.

“I was a Christian long before I was a philosopher,” says Westphal, who has been teaching at the Rose Hill campus for more than 20 years. “Coming out of a very religious background, I was always interested in the relationship of philosophy to religion, of reason and faith.”

Westphal credits Arthur Holmes, Ph.D., his professor at Wheaton College, with getting him hooked on philosophy.

He graduated from Wheaton with a degree in history, and attended Yale University where he earned his master’s degree and doctorate in philosophy.

“Holmes was one of those very special teachers who helped people to think in ways they hadn’t thought before,” Westphal says. “He used to say there isn’t anything such as Christian philosophy, only Christian philosophers whose philosophical reflection grows out of their faith.”

That idea, he says, comes from St. Anselm, the 11th century philosopher who described religious philosophy as “faith seeking understanding.”

Westphal came to believe that the expression could apply to all philosophers, not just religious ones.

“Whenever we begin to reflect philosophically, we begin somewhere,” he says. “We start with at least an implicit view of the world; that’s a faith in the sense that we hold it without having been able to provide any absolute guarantees or justifications of it.”

Through his research and analysis, Westphal has found that a wide range of ideas put forth by continental philosophers can be applied to religious life. “Some of them were not religious people themselves,” he says, “and some of them were antireligious people, like Marx, Nietzsche and Freud—to whom I found myself strangely but strongly drawn.”

The three philosophers, in fact, were not only atheists; they were suspicious of, and hostile toward, Christianity, seeing it as self-serving. Yet Westphal believes that Christians can glean something important from them.

“What Marx, Nietzsche and Freud argued is that motivations are often not terribly honorable and, therefore, we hide them from ourselves behind religion,” he says. “When they offer this kind of critique, they describe something that happens all too often in religious life, something that is a betrayal of religion. But I argue that it’s not the whole story.”

For Westphal, the reality of Christianity is more complicated. Christians can interpret their religion for good motivations as well as for bad. American slave owners justified the system of human bondage, Westphal says, by arguing that God made blacks inferior to whites. But it is also true, he says, that abolitionists used a religiously based argument that blacks were equal to whites in God’s kingdom.

Westphal’s insights resulted in a book, Suspicion and Faith: The Religious Uses of Modern Atheism(Fordham University Press, 1998), and includes a chapter on “Atheism for Lent.” This incongruous idea has been the focus of many of his lectures throughout the country.

Westphal has been at work on his 10th book, Lévinas and Kierkegaard in Dialogue, which will be published next year by the Indiana University Press. It is a collection of eight essays about Emmanuel Lévinas and Søren Kierkegaard, and it deals, in part, with the Enlightenment belief that human reason is an adequate foundation for moral and religious life.

Both Lévinas and Kierkegaard argued that the belief that human reason was a good foundation for moral and religious life was mistaken, and Westphal tends to agree.

“I think my understanding of my faith, and of God and who I am in relationship to God, has evolved and developed over time,” Westphal says. “But it’s been a fairly smooth evolution. I’ve never had a crisis of faith, and I consider myself very fortunate.”