skip to main content
Return to Fordham University
You are at:Home»Inside Fordham»Cura Personalis: A Patron Saint 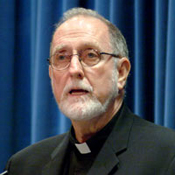 Peter Faber, the least well known of the three earliest Jesuits whose anniversaries we celebrated last year, died at the age of 40, just as he was going to the Council of Trent as a theological consultant in 1546. He had been sent there by Ignatius Loyola just as Ignatius had sent Xavier to Asia as a missionary. For several years Faber had traveled through Europe pursuing Catholic reform both as a theological controversialist and also as a spiritual director devoted to the moral reform of leading actors in the Church.

Faber kept a spiritual diary as he traveled around Europe. On November 19, 1541, Faber made this entry:

I experienced great devotion today at the thought of keeping in my memory eight persons, with the desire to pray for them without paying any attention to their faults. They were the Supreme Pontiff, the Emperor, the King of France, the King of England, Luther, the Turk, Bucer, Philip Melanchthon. On this occasion, moreover, I sensed in my soul that the aforesaid men are judged by many. Thus there arose in me a certain holy compassion accompanied by a good spirit.

Faber lumped together eight contemporaries for whom he felt called to pray, despite their faults. First among them he named the current Pope, Paul III, who had just approved the establishment of the Society of Jesus a year earlier. Generally accounted a reform-minded Pope, Paul III was nonetheless a rather worldly sovereign. Long before becoming Pope, he had become a cardinal at the age of 25 through the influence of his sister who was the mistress of one of the worst Popes in history, Alexander VI. He fathered four illegitimate children as a layman-cardinal. He only sought ordination to the priesthood at the age of 52 when he started to turn pious. As Pope, always a family man, he made two of his grandsons cardinals. Grateful as Faber was for the approval of the foundation of the Society of Jesus by the Pope, he entertained no illusions about Pope Paul III.

Right after the Pope he mentioned the Emperor—the Holy Roman Emperor, Charles V. For all his Catholic identity, Charles V in 1527 had directed his armies against Rome when he was in struggle with Pope Clement VII. The King of France for whom Faber was praying was Francis I, the mortal enemy of Charles V, but also Charles’s brother-in-law. Faber also committed himself to pray for the King of England, Henry VIII, who had taken England out of unity with the Catholic Church a few years earlier. By November 1541 Henry was married to the fifth of his six wives, the second he was eventually to behead.

Then, among three of the leading Protestant theologians and reformers of the sixteenth century—Martin Luther, Martin Bucer and Philip Melanchthon—Faber casually included in his prayers the person he simply refers to as “the Turk.” He himself was called by his subjects in the Ottoman Empire the Shadow of God on Earth, the Sultan-Caliph Sulayman I. He was Sulayman the Magnificent to the West. While Faber was praying for him, Sulayman was planning to conquer Catholic Hungary and include it in his empire.

Note that Faber was a Catholic controversialist and had even argued in public with people like Bucer. The sixteenth century was not generally an era of ecumenical or inter-religious good will. But Faber was still able to arise above the controversies in which he had engaged and to see the human sincerity of the Protestant reformers and their spiritual needs, just as he could see the goodness of “the Turk.”

What has any of this to do with the Jesuit tradition in education or Fordham University? A great deal. At the center of the Jesuit educational tradition is what Jesuits called cura personalis, “personal concern” for each of our students, alumni and colleagues. Faber felt deeply about the people, like Martin Bucer, with whom he engaged in controversy. He had no illusions about the Catholic leadership of his time and he held no personal grudges against the apparent enemies of the Catholic Church.

At Jesuit universities we hope that all—students, faculty, alumni—will imitate Faber’s practice of cura personalis, “a certain holy compassion” across the many intellectual and spiritual differences that may divide us.