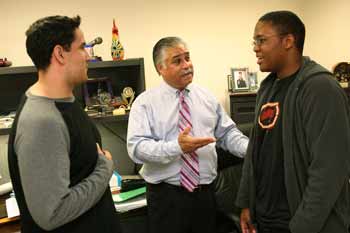 There are 91 stairs to climb to reach the CSTEP office on the top floor of Collins Hall, but that’s barely the first leg of a journey that is made one step—and one student—at a time.

CSTEP, a statewide program that stands for Collegiate Science and Technology Entry Program, is designed to groom certain minorities to gain admission to graduate-level programs in the scientific, technical, health and licensed fields where they are largely underrepresented. At Fordham, the program supports 200 undergraduates, mostly of African-American and Latino descent, on the University’s three campuses.

According to Michael A. Molina, director of STEP and CSTEP, about 35 percent of college diplomas in the United States go to graduates of science, technology, engineering and math (STEM) programs. In China, India, Japan and Korea, Molina said, STEM graduates are closer to 70 percent.

“The United States has maintained its leadership in the world not as a manufacturing capital, but as the capital of technological and innovative ideas,” Molina said. “Now we’re in danger of losing that edge because we’re not producing enough graduates in areas of STEM study.”

Molina hopes to make Fordham a national leader in producing minority students who pursue graduate programs in STEM fields by breaking into the national rankings compiled by the Association of American Medical Colleges (AAMC). Helping him to reach his goal is a professional staff of five administrators and counselors that act as liaisons to the students, one per incoming class.

• a five-week freshman summer program to help students bridge the transition from high school to college, and which includes classes in chemistry, philosophy and pre-calculus.

• career option counseling and exposure to CSTEP alumni working in the STEM and licensed fields.

• paid research internships to offer students a chance to work with Fordham faculty.

Another aspect of CSTEP support is boosting student morale, said counselor Christie-Belle Garcia. This is especially important when chemistry and physics mid-terms and finals seem daunting for students who may not have come from the highest-ranking high schools and may not have had the chance to take Advanced Placement courses.

“If our students feel discouraged, we work to put them back in tune,” Garcia said. “We offer them perspective, to surround them with people who are like-minded to keep them from drowning.

“In our office, it goes beyond academics. It’s an environment of family,” she said.

The challenge of supporting minority students through a tough curriculum and daunting financial circumstances (CSTEP does not contribute to tuition) is evident in the graduation statistics for minorities in pre-med programs nationwide.

According to the AAMC, the nation’s leader in African-American graduates is a historically black college, New Orleans’ Xavier University, which produced 149 applicants to medical school in 2007. From there, the number drops considerably, with 10th place Morehouse College producing 38. Among Latinos, the University of Puerto Rico-Piedras produced 159 applicants while Georgetown University produced 12.

In order to make the AAMC rankings, Fordham’s CSTEP program must raise its average postgraduate acceptance rate of six student scholars to at least 11, Molina said.

“Ten or 15 students per year doesn’t sound like a lot, does it?” Molina said. “But that’s how great the challenge is for certain minorities to succeed in these fields.”

With this year’s freshmen class representing arguably the University’s most diverse class ever, Molina said that CSTEP hopes to reach that ranking within the next few admissions cycles.

“More and more students are coming with an interest in these fields, and with the background to succeed,” he said.