skip to main content
Return to Fordham University
You are at:Home»Inside Fordham»Course Opens the World of Publishing to Students

A new class at the Lincoln Center campus is giving students an inside look at the diverse, dynamic, constantly evolving world of publishing—as seen through the eyes of guest speakers who sit down before the class every week to tell their stories. 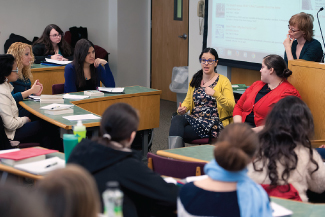 The roster for this semester includes people from all over the industry: executives, publicists, literary agents, marketing directors, writers. Also on the schedule are a few bestselling authors, including Mary Higgins Clark, FCLC ’79, and Elizabeth Gilbert, author of Eat, Pray, Love: One Woman’s Search for Everything Across Italy, India and Indonesia (Penguin, 2006).

In addition to preparing students for success in a variety of publishing careers, the course accentuates the value of a degree in English or another humanities field, said Mary Bly, Ph.D., professor of English, who initiated and teaches the class.

“It is probably the most important degree, in my opinion, that someone can get,” she said. “What we can teach them is how to write, and they can take (that skill) into any industry. But the other thing we can teach them is a practical sense of, ‘You can do anything you can see. If you see a job you like, you can do that.’”

Bly, a bestselling author under the name Eloisa James, drew upon her abundant contacts in the industry to schedule speakers for the class, titled Publishing: Theory and Practice. It’s an expanded version of a genre fiction course that Bly taught a few years ago, which also featured talks by publishing professionals.

This time the class has more of them, balanced between writers and “people who are working in and around writing,” said Bly. Each guest is asked to describe how his or her career developed.

In this kind of course, Bly noted, students can collect speakers’ business cards and follow up about internships. They might even find their callings, as one student did during the genre fiction course when the speaker was an audio engineer who produced and directed the Harry Potter audiobooks.

“(She) had never heard of the job he has,” Bly said. “She said, ‘I never knew it, but this is what I want to do.’ So one of the things I want to do here is show people the width of jobs that they may not have thought of that are all about media.”

He came back on Feb. 4 to address the new class, along with three other professionals who described the challenges of marketing books to communities of readers who have highly particular tastes.

“You used to have to go wide” and promote a book in major media outlets to reach the small percentage of people who might be interested in it, said Rachel Fershleiser, literary community organizer with the social media company Tumblr. “Now, you reach out to people who are readers—are romance readers, are sci-fi readers, are cookbook lovers,” or devotees of other genres or sub-genres, she said.

“(If) you have ideas for how publishers can reach, capture, hold onto, and interact directly with reading communities, they are interested,” Fershleiser said.

The central challenge is “the concept of book discovery, and how that happens when there’s just so much going on,” said speaker Antonella Iannarino, FCRH ’07, a literary agent with the David Black Agency.

Describing her career path, another speaker—Julie Blattberg, executive director of consumer engagement for Open Road Media—spoke about her discovery that she enjoyed being a managing editor.

“It’s more creative than I thought it would be,” in part because of the problem solving that’s required, she said. “My advice is, always give something a try unless you’re sure you’re not going to like it, because you never know where your strengths and talents might actually rise up.”