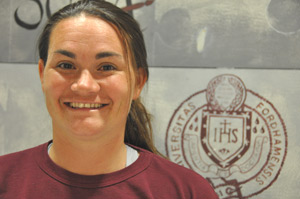 Bridget Orchard will have nearly her entire team back for the 2011 season.
Photo by Janet Sassi

Bridget Orchard doesn’t know anything about a sophomore slump. In just her second job as a collegiate softball coach, she made Fordham history by leading the Rams to their first NCAA playoff appearance.

Not bad for someone who—at one point—had never considered coaching as a profession.

“I played softball in college and it was fun, but I had no idea the coaching aspect would be so great,” said Orchard, who majored in communications at Villanova University.

After graduation, Orchard took a part-time coaching position at Cabrini College in southeastern Pennsylvania for the same reason that many college graduates accept their first job offer: she needed the money.

As far as debuts go, one could say Orchard hit it out of the park. In four seasons, she groomed the Cabrini Cavaliers into a regional powerhouse.

Since taking the helm at Fordham in 2001, she has transformed the Rams into one of the top softball teams in the Atlantic 10 Conference. It is quite the turnaround for a program that never had a winning season in its 17-year history prior to Orchard’s arrival.

The 2010 season was Orchard’s—and Fordham’s—best yet. The team came within one game of winning the conference title and participated in the NCAA softball playoffs for the first time.

Fordham ended its season with a 49-12 record, the best winning percentage in the history of the program. The Rams’ appearance in the regional finals was the furthest an Atlantic 10 playoff team advanced this season.

“It was awesome,” Orchard said. “The girls worked so hard and I’m really proud of them and the time commitment they put into it. It’s nice to have a reward for the work they’ve done because the last couple of years we fell short [of making the playoffs].”

With the exception of Orchard’s first season at Fordham, the Rams have gone to the Atlantic 10 tournament every year. So what put them over the hump and into the NCAA playoffs this year?

“The players did a lot of little things this year as far as their commitment and belief in themselves and in each other,” Orchard said. “We worked really hard and stayed focused for the entire season, which is important, because it gets to be a long year. For this team, the sacrifices they were willing to make to get there were key. In the past, we’ve always worked hard, but this year we sacrificed the most.”

Orchard sold this team on the virtue of hard work reaping big rewards.

The softball Rams practiced six days a week for as many hours as are permissible by the NCAA. They were nearly religious when it came to strength conditioning and agility training. They had more focus and discipline in the areas of diet and sleep—aspects of their training regimen that are difficult to maintain when peers are out late with friends or eating pizza for lunch instead of high-protein meals.

“They really bought into that, which has played a huge part in our success,” Orchard said.

The hard work obviously paid off, but the team’s success also was due to an inner fortitude that stems from their coach.

“When we start the season in February, it’s still snowing here. We’re still practicing inside, and we have to go out west to play some games,” she said. “We’re a little bit behind, but that gives the girls motivation to work that much harder, because they know teams down south and out west play outside every day.”

Orchard exudes positivity—an attitude that things will always get better. When asked about the girls’ locker room rituals, she responds that the team doesn’t have any.

“The girls like to joke that the cafeteria is their meeting room and we use this to our advantage,” she said. “When we go to Charlotte or the University of Massachusetts, with their locker rooms and facilities with stadium seating, for a second there we’re like, ‘Wow.’ We don’t have that, but it fires the girls up.

“If we keep getting support from the University, we may be able to have that someday,” Orchard said.

Next year looks promising for the Rams. With only one player leaving the team due to graduation, Orchard will be working with essentially the same squad, including ace pitcher Jen Mineau, a rising junior.

For now, Orchard will spend some weekends with her husband and three children, ages 4 and 5, and a daughter whom she gave birth to this past December.

“My husband is amazing and we have a great nanny,” she said, referring to her in-season support team. “I consider myself to be very lucky, especially to have a job that doesn’t feel like it’s work because it’s so much fun and rewarding.

“Just watching the girls come in as freshmen and leave as confident seniors—it makes it all worth it,” she added.