skip to main content
Return to Fordham University
You are at:Home»Inside Fordham»Class of 2014 Breaks Record for Urban Plunge 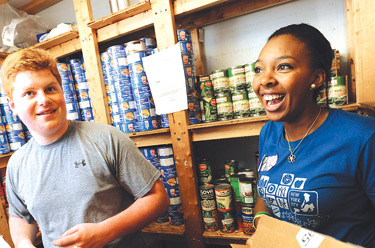 Incoming freshmen work in the POTS—Part of the Solution—food pantry in the Bronx as part of Urban Plunge 2010.
Photo by Chris Taggart

Days before the hoopla that accompanied Opening Weekend, 260 members of the Class of 2014 got to experience being “men and women for others.”

They participated in Urban Plunge, a program that allows incoming freshmen to work together on community service projects focused on local youth, the elderly, the homeless and the environment.

This was the largest group in University history to take part in the pre-orientation program, which is run by the Dorothy Day Center for Service and Justice at Fordham.

Students did service work at more than 20 sites in the Bronx and Manhattan, including soup kitchens, nursing homes, transitional shelters, hospitals and community gardens. Many of their efforts took place in parts of the Bronx that are marked by the lowest per-capita incomes in the country.

The agenda for students from Fordham College at Lincoln Center included an arts and cultural component, thanks to an inaugural collaboration with the dean for first year students at that campus, said Sandra Lobo-Jost, director of the Dorothy Day Center.

“One of the groups learned about the history of Harlem and its influence in the arts. Then they practiced a West African dance led by upperclassmen BFA students,” Lobo-Jost said.
“This was an incredible introduction to life at Lincoln Center through hands-on experiences in New York City.”

The roughly 200 students from Rose Hill who cut short their summer vacations to volunteer also made an impact while learning about the Bronx through community partners, she said.

“Urban Plunge is an exciting way for freshmen to start their college careers at Fordham in a hands-on way that is connected to our mission,” she added.

The record number of Urban Plunge participants was not the only way in which the Class of 2014 has demonstrated its excellence.

This was the 19th consecutive admissions cycle that Fordham has set a new record for applicants, with slightly more than 27,600—a 14 percent jump from last year.

As of late August, there were 1,885 freshmen in the incoming class. These preliminary estimates indicate that 1,440 will study at Rose Hill and 445 will call Lincoln Center home.

The average SAT score for the class is 1249, which represents a nine-point gain when compared to last year’s average of 1240.

Moreover, one of the most notable changes was a geographic shift toward applicants from non-traditional distance markets, both in the United States and internationally.

While 40 percent of the class is from the State of New York and 19 percent hail from the boroughs of New York City, Fordham’s reliance on applications from New York has decreased, said John W. Buckley, associate vice president for undergraduate enrollment.

“It’s exciting that we are drawing more from national markets, yet still preserving important markets that are close to us,” he said.

This class is 55 percent female, up from last year’s 51 percent, and 77 percent of students plan to live on campus while 23 percent are commuters. Buckley also reported that more students are living on the Lincoln Center campus than in recent years.

“This was a class selected from an exceptionally strong applicant pool,” Buckley said. “We are delighted that the admit pool converted into such a talented freshman class.”