skip to main content
Return to Fordham University
You are at:Home»Inside Fordham»CBA Students Get a Lesson in Alternate Investments from Blackstone CFO 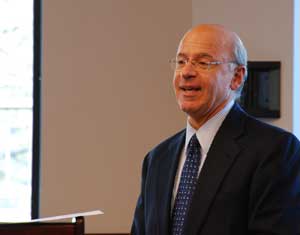 Michael A. Puglisi (CBA ’72) discusses the ins and outs of Blackstone’s IPO.
Photo by Jeffrey Haynes

Students in Fordham’s College of Business Administration (CBA) got a lesson in private equity asset management and investment banking on April 22 from one of the best in the business.

The teacher was one of CBA’s most notable alumni, Michael A. Puglisi, CBA ’72, senior managing director and chief financial officer of the Blackstone Group.

Puglisi, who sits on the executive committee of the University’s President’s Council, explained the rationale that drove Blackstone to consider an initial public offering (IPO). He also touched on some of the key issues Blackstone addressed in completing its IPO in June 2007, a move that made headlines around the business world and left the firm’s top two partners with billions in profit.

“It was one heck of a ride and experience,” he told a diverse group of students on the Rose Hill campus. “It is the highlight of my career, and it’s my privilege to share it with you.”

Puglisi, who was raised in Jackson Heights, Queens, traced his career from Fordham to Blackstone, a leading global alternative asset manager and financial services provider with $110 billion in assets under management.

“Alternative assets are the fastest growing segment of the industry,” he said.

He expounded on the pros and cons of going public and how the company drew the Chinese government as one of its IPO’s largest investors. He fielded questions from students on the present economy, the impact China is having on markets worldwide and, of course, how Blackstone picked the perfect time for an IPO.

“We got lucky,” Puglisi said. “We got out two weeks before the world collapsed under the sub-prime mortgage [crisis]. I’m not saying it isn’t tough for us now—it’s tough for everyone in the financial world.”

After the event, faculty and students praised Puglisi’s presentation, calling it both accessible and engaging.

“He is a natural professor,” said Donna Rapaccioli, dean of CBA. “He has the ability to take a very technical subject and describe it so that everyone walks away with a good understanding.”