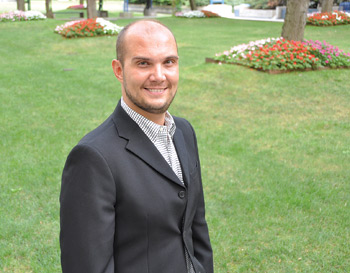 Sertan Kabadayi, Ph.D., studies how companies can best manage and integrate the channels they use to interact with consumers.
Photo by Patrick Verel

Text messages may become the next great tool of marketers in the United States, but first they must establish trust with consumers, said Sertan Kabadayi, Ph.D., assistant professor of marketing in the Graduate School of Business Administration.

Although not widely used in this country, short message service (SMS) advertisements are common in Asia and Europe, Kabadayi said. That’s partly because consumers in those countries do not pay for incoming messages.

“In Europe, when you walk by a store such as Starbucks, you receive an SMS message on your cell phone with a coupon as an attachment. So it’s great targeting in terms of time and location. This kind of marketing is still at a very early stage in the United States,” he said.

There is also a level of trust that exists between consumers and marketers in those countries that American companies should take into account, he added.

In papers such as “Consumer Acceptance of SMS Advertising: A Study of American and Turkish Consumers,” which he co-wrote for the International Journal of Mobile Communications, Kabadayi explored the barriers to SMS advertising faced by U.S. companies.

In Europe, consumers are open to SMS contact from advertisers because they trust that marketers won’t abuse that relationship, he said. But that is not the case in the United States, as Kabadayi discovered.

“I was in a retail store, and they told me, ‘If you text this number to this number, you will receive a $10 coupon,’” he said. “I agreed, but no one told me that I would receive SMS messages from the company for months afterward as part of an ongoing campaign. That is not the way to go.”

Not only must consumers trust that companies will not bombard them with messages, but they also must trust their service providers to filter unwanted solicitations, Kabadayi found in his research.

“For many people, service providers act like a buffer. If I trust the service provider, then I know that it will only send me messages that are secure and safe,” he said. “If a company wants to use SMS or mobile advertising, maybe it needs to choose a service provider that people trust the most.”

This research stream intersects with Kabadayi’s focus on distribution systems. In particular, he is interested in the challenges faced by companies that manage multiple channels simultaneously. Clothing retailer The Gap, for instance, operates three distinct channels—its store, catalogue and website.

“Today, IBM uses around 20 different channels. It can be good or bad for the customer, but when you think about the company, it could be a nightmare,” he said. “If you don’t manage it, 20 channels can be like 20 different organizations within the company. My research aims to assist managers in the design and management of such complex channel systems to yield the highest performance for their firms.”

The theme of trust comes up often in Kabadayi’s work. A classic example of the value of consumer trust occurred in 2008, when FAO Schwartz and Toys “R” Us posted profits despite a massive recall of Chinese-made toys, which constitutes almost 90 percent of toys sold in the United States.

Not all toy retailers were so lucky.

“If you trust that a store won’t carry any unsafe toys, you don’t mind buying there, even if the toys are coming from China,” he said. “But in another store where people do not have that kind of trust, the results are different. The lack of trust not only hurts sales, it negatively impacts manufacturers’ market share and profits.”

Consumer trust also can be applied to the use of social media. When people learn to trust blogs and other social media tools because they are seen as less beholden to corporate interests, it can lead to a powerful connection between consumers and companies—but only if used properly by those companies.

But reliance on the social media can backfire, as Kabadayi believes it did with recent movies likePrince of Persia and Sex and the City 2. Though they benefited from an enormous amount of pre-release publicity, both films fell short of their financial goals, in part because of the thrashing they received from bloggers and twitterers.

Increasingly, the newest methods used by companies to interact with consumers are parts of the social media, which include YouTube, Twitter and blogs. Each presents new opportunities, but Kabadayi said companies would be wise to take a measured approach to these new channels.

“Sometimes my students ask me questions about e-marketing and mobile marketing. I tell them that it’s all marketing, just conducted through different platforms. So you have to have basic marketing knowledge,” he said. “Remember, most of those dot-com companies in the 1990s became dot-bombs because they thought that they could just make money and become rich. But they forgot that you have to have basic marketing skills.”