skip to main content
Return to Fordham University
You are at:Home»Inside Fordham»Bryant Dunston Selected to Participate in 2008 Portsmouth Invitational 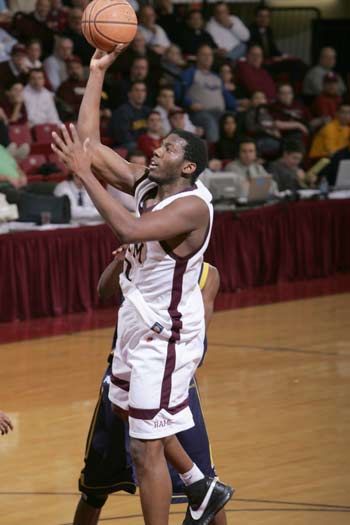 Fordham senior forward Bryant Dunston was selected as one of 64 senior college basketball student-athletes to participate in the 2008 Portsmouth Invitational Tournament (P.I.T.) from April 9 to 12 in Portsmouth, Va.

The P.I.T. is the nation’s oldest amateur basketball tournament. It is recognized by NBA and European scouts as the premier showcase for future professional players. The P.I.T. is the only tournament for college seniors to participate in and be evaluated by the NBA prior to its pre-draft camp in Orlando, Fla.

On the season, Dunston led the Rams in scoring, averaging 15.5 points per game, and rebounding, averaging an Atlantic 10 best 9.8 rebounds per game. He also led the 2007-08 squad in blocks with 79 and was second in field goal percentage (.252) while recording 57 assists and 29 steals. Besides rebounding, Dunston ranks among the Atlantic 10 leaders in scoring (11th), field goal percentage (second) and blocks (second).

Dunston, who also was named to the 2008 Atlantic 10 All-Defensive Team, recorded an Atlantic 10-best 15 doubles-doubles this year, including eight in the last 10 games, to bring his career double-double total to 40.

Over his four-year career, Dunston appeared in all 120 games, starting 118, and amassing 1,832 career points—good for second place on the Fordham all-time scoring list. He also pulled down 993 rebounds, good for third all-time at Rose Hill, and this winter he became Fordham’s career blocked-shots leader, graduating with 294 rejections.