skip to main content
Return to Fordham University
You are at:Home»Inside Fordham»Bronx High Schoolers See Their Home Through the Eyes of History 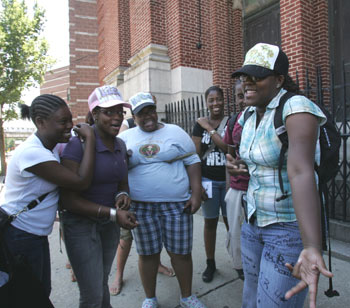 Bronx high school students in the History Makers program take turns rapping and dancing while on a walking tour of the borough.
Photo by Bruce Gilbert

On a hot July afternoon, with a Fordham University professor as their guide, a group of high school students learned to gaze upon the hidden history of the Bronx.

It lay all around them as they ambled through the Morrisania neighborhood. New buildings stood next to walk-up tenements dating from an earlier era, before the widespread arsons that ravaged the Bronx in the 1960s and 70s.

“Every time you see a new building, it means there was an older building that burned,” said their guide, Mark Naison, Ph.D., professor of African and African-American studies.

The fires, and the community’s response to them, were one of many topics the students absorbed during the six-week History Makers program, which gives them a fresh view of history and methods for researching it.

This was the third summer for the program, managed by officials at Fordham University and the Citizens Advice Bureau, a nonprofit settlement house that provides youth enrichment programs. History Makers admits about two dozen students each year. It is funded by the Teagle Foundation.

The students learn stories of the city, such as immigrant life and the experiences of African Americans. They interview people and conduct research in libraries and archives while preparing historical presentations, with Fordham students as mentors.

Along the way, they walk the city, guided by scholars who help them see it differently—“as a learning laboratory of sorts, so that history isn’t just something that’s in a book,” said Brian Purnell, Ph.D., assistant professor of African and African-American studies, who designed the program.

The students learned about the rich diversity of the Bronx during their tour with Naison, associate director of Fordham’s urban studies program.

He showed them a Baptist church that was adorned with the Star of David because it used to be a synagogue. The building could later become a mosque because of the area’s growing African population, he said, a trend known as ethnic succession.

The church built houses to replace buildings that burned, according to Naison, adding that “the other thing that brought this neighborhood back was kids like you.”

Young people in the Bronx created a musical outlet for the tensions of the time by inventing Hip-Hop, Naison said. Using a portable stereo, he played music that grew out of the Bronx’s rich musical heritage. Students formed a circle, where a few of them danced.

One student was inspired to learn about the ways the past continues to echo.

“I feel that my past is also my future,” said Alisha Cleveland, 15, a sophomore at the Choir Academy of Harlem.

Most instructors are from the Department of African and African-American Studies at Fordham. Others are from Columbia University and the Bronx County Historical Society.

This year, for the first time, the students received extra exposure to different historical approaches: oral history, anthropology, immigrant history and the public presentation of history. Specialists in each approach took a turn guiding the students for a week.

The students spent the final week living on the Fordham campus at Rose Hill, getting a taste of college life and preparing their final projects. Those projects, presented at the Rose Hill campus on July 31, showed a creative take on how to present history.

One group presented the history of New York City’s extensive public parks, and questioned whether the benefits of green space are fairly allocated between high-income and low-income areas.

Cleveland drew some applause by asking, “We all know men have parks named after them, but what about the women?”

Another examined two revolutionary groups prominent during the 1960s, the Black Panthers and the Young Lords. The students tracked down a member of the Young Lords, Richie Perez, to learn about those who joined the group. They juxtaposed his words with a more detached, academic description of the Lords to make a point about how history is often written.

“We forget to ask the individuals themselves what they represent,” said Nastenka Ovalle, 17, a recent graduate of Jane Adams Vocational High School.

“Our program has been a really big success … so we’re looking forward to reapplying for another couple of years,” she said.