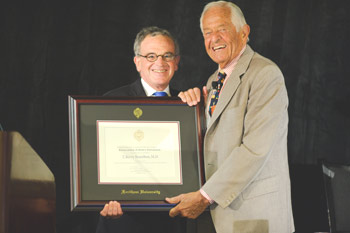 T. Berry Brazelton, M.D., emeritus professor of pediatrics at Harvard Medical School and founder of the Brazelton Touchpoints Center, told educators on April 9 to embrace the developmental changes that young children go through, even if those changes bring turmoil.

Brazelton’s talk, “Touchpoints and the Critical Importance of the Early Years: Investing in Infants, Young Children AND Their Parents,” opened the two-day Young Child Expo & Conference at the New York Hilton. The expo, now in its seventh year, is co-sponsored by Fordham’s Graduate School of Education and Los Ninos Services.

Before he spoke, Brazelton received Fordham’s Excellence in Early Childhood Award from Stephen Freedman, Ph.D., senior vice president/chief academic officer and professor of ecology and evolutionary biology at Fordham. Freedman praised him as an extraordinary advocate for young children and parents.

In his remarks, Brazelton estimated he has seen 25,000 patients in his 92 years. Parenting has gotten more difficult since he started, and he noted that the United States is hands down the least-friendly country for raising children. Touchpoints were borne of the frustrations that he’s heard from parents.

“I began to realize that a few years ago, when I would ask, ‘How do you plan to feed your baby?’ Fifty percent of mothers would say, ‘Bottle.’ I’d ask why, and they would say, ‘I can’t stand to get that baby so close, because I know I’m going to have to go back to work so early and leave that baby with somebody else.’”

Above all, he said, parents learn best how to be parents by doing, not by instructions.

“One of most important things I’ve told parents is, ‘Don’t worry about your mistakes,’” he said. “You learn more from your mistakes than you ever learned from your successes. So, look forward to a mistake, and you’ll learn from it.”

Touchpoints, he explained, are times when a child is about to learn something new. The first one, for instance, occurs right after birth, when a newborn tilts its head in the direction of a parent’s voice.

“Development goes in bursts and then it levels off, then another burst, and then it levels off, and just before each burst, the baby falls apart, the parent falls apart with them, and the baby becomes irritable and won’t sleep or won’t eat,” he said. “If we can predict these, and give parents a feeling that they know what’s coming, then they begin to feel like, ‘I know what I’m doing.’”

Jane Singer, Ph.D., assistant professor of pediatrics and psychiatry at Harvard Medical School and a faculty member at the Brazelton Touchpoints Center, expanded on Brazelton’s point by mentioning a child, who at nine months had figured out how to get across a room to retrieve a ball.

“They’re all excited, thinking, ‘I did it!’ Dr. B. often talks about how, at nine months old, we can tell if a baby expects to be successful,” she said.

“It tells us that they have the drive to master, and it also tells us about their external drive system. What do we all do when a baby takes her first step? We celebrate. What if she is practicing that new skill in the middle of the night? We’re not celebrating. But from the baby’s perspective, she has a central nervous system that’s telling her to practice. She goes through a developmental touchpoint where she’s about to come up with an exciting new skill.