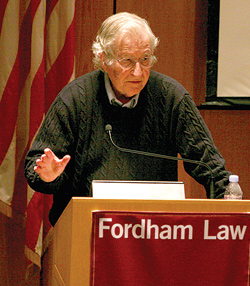 Noted linguist and philosopher Noam Chomsky joined author Keith Bolender to challenge the United States’ approach to Cuba, in a lecture and discussion at Fordham on April 4.

Bolender, in his book Voices From the Other Side: An Oral History of Terrorism Against Cuba, (Pluto Press, 2010), interviewed Cuban citizens who have either survived attacks or lost family members due to counter revolutionary attacks waged against the island, since Fidel Castro overthrew the Batista government in 1959.

One such incident, Bolender said, was the bombing of Cubana Airlines Flight 455 on October 6, 1976, killing all 78 people on board. Bolender noted that Luis Posada Carriles, one of men responsible for the bombing, is still a free man, and living in Miami.

“The United States government has yet to recognize the bombing of Cubana Airlines as an act of terrorism,” said Bolender.

Chomsky, Institute Professor of Linguistics at MIT, and author of the introduction to Voices, said that the threat of Cuba or Latin America falling to Communism is less today than it was in the 1960s. And yet, up until 2003, more U.S. resources were dedicated to the embargo of Cuban goods than to combatting terrorism.

Chomsky said the United States maintains a hard line against Cuba because Castro’s defiant stance toward it might inspire other nations in the region to follow suit.

There is also the historic American idea of Manifest Destiny, he said, reflected in the United States’ continued presence at Guantanamo Bay: the notion of American expansion into Cuba still holds sway today.

“Cuba is a kind of microcosm that shines a very bright light on ourselves, on our moral and electoral culture,” said Chomsky.

The talk was sponsored by the Fordham Latin American and Latino Studies Institute.