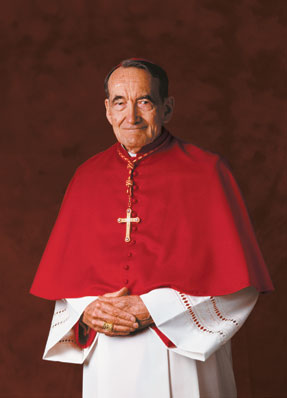 These quotes were taken from Masses celebrated in the days following the death of Avery Cardinal Dulles, S.J., on Dec. 12. Ceremonies were held on Dec. 16 and 17 at the University Church on Fordham’s Rose Hill campus. A Mass of Christian Burial was celebrated at the Cathedral of St. Patrick on Dec. 18.

“We all feel his loss deeply. Never will we forget his brilliance, his kindness and generosity, and above all, his uncompromising loyalty and devotion to the Lord and to the church he loved so well.”

“Tonight, in the heart, all of us have reason to wish that the Lord had allowed us to hold onto Avery Cardinal Dulles a little longer. But he did what he wanted to do; he did it well; and it was proclaiming Jesus Christ.”

David S. Ciancimino, S.J., provincial of the New York Province
of the Society of Jesus:

“Cardinal Dulles was all they said he was: theologian, mentor, counselor. He was, however, first and foremost a man of the church; a man in service to the church; a man who shunned
the limelight and who insisted that he only lived to shine light upon the Lord who had captured his heart.”

“His family gave Avery to us some 62 years ago, when he entered the Society of Jesus. And for this tremendous gift, of Avery’s life to the Society and the church, we say thank you.”

“Avery Dulles, in death as so much in life, has much to teach us.”

“Last April, when he was scheduled to give his last lecture as Laurence McGinley chair, he was not able to deliver it himself, and he asked that I deliver it for him. When I asked him before the lecture if I could make changes in the text, he replied in writing, ‘Only if they are improvements.’ I read the text as written.”

“Avery’s fidelity to the truth of Catholic tradition—what he believed—was rooted in his deep and confident trust in the one
in whom he believed, the ultimate source of that tradition—
our Lord and savior Jesus Christ—who has now welcomed
Avery Dulles to everlasting life.”