skip to main content
Return to Fordham University
You are at:Home»Inside Fordham»Athletic Hall of Fame Inducts Class of 2008 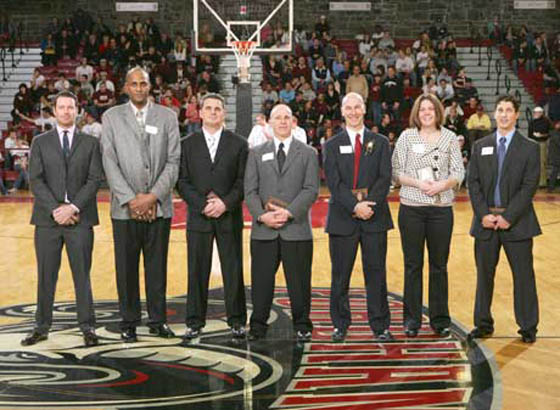 Matt Albiani, FCRH ’94
Albiani was on the freshman lightweight eight rowing team that won the prestigious Dad Vail Regatta. The following year he won another Dad Vail title as stroke of the varsity lightweight four. As a junior, Albiani stroked the lightweight eight to an undefeated season, capped by an ECAC championship. He closed his career by leading the team to another ECAC title and the grand finals at the IRA national championships.

Bobby Kingsbury, CBA ’08
Kinsgbury was a two-time Atlantic 10 Baseball Player of the Year, becoming the first sophomore to earn the award in league history and the first Atlantic 10 baseball player to earn consecutive Player of the Year awards. Kingsbury can be found among the top 10 in most career and single season offensive categories for the Rams, and was drafted in the eighth round by the Pittsburgh Pirates in 2002.

Jack Pieracini, FCRH ’98
Pieracini was a mainstay at linebacker from 1994 to 1997. A 1997 Football Gazette All-America, Pieracini recorded a school record 385 career tackles, three times recording more than 100 tackles in a season, only one of two Rams to accomplish that feat. A three-time Second Team All-Patriot League selection, Pieracini served as a team captain his junior and senior seasons and also received the 1997 Edward Danowski Award.

Vinny Porricelli
Vinny Porricelli has been an integral part of the Athletic Training Room since arriving in 1982. In 1999, he was named the fourth head athletic trainer in Fordham history. Besides his athletic training duties, Porricelli is a full-time physical therapist for the Rams. His dedication and enthusiasm for the position make him a favorite among students and coaches alike.

Amanda Smith, FCRH ’99
Smith’s crew prowess led Fordham’s top shell to four straight Atlantic 10 championships. She also won a Dad Vail Regatta title as a sophomore, which she defended in her junior and senior years. Her three Dad Vail championships mark the only wins for the Fordham women at that regatta.

Ralph St. Pierre, FCRH ’41
A world-record setter, St. Pierre holds the oldest record in Fordham men’s track and field. As the lead-off man on the Fordham 1,600-meter relay in 1939, St. Pierre helped break the National AAU indoor record, and was on the one-mile relay that same year that set a world record at Dartmouth. He also set the Fordham indoor and outdoor long jump records, both of which still stand.