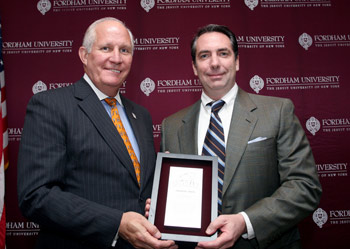 After a year of sweating, sliding, shooting and sprinting, the student-
athletes of Fordham University cleaned up for a night of celebrating at 75th annual Block F Awards Dinner.

The event, held on April 29 at Villa Barone Manor in the Bronx, was sponsored by the Department of Athletics.

Steve Potsklan, head coach of the men’s and women’s swimming and diving teams, received the Iron Major Coach of the Year Award. He led the women’s squad to a second place finish at the Atlantic 10 Conference Championships—its best-ever showing. This is his second Iron Major Award, having received the honor once before in 2001.

In accepting the accolade, Potsklan credited his athletes with traveling a long road to success over the course of the season.

“Watching them transform and build and change throughout the season, they represent the model for what we want to do with our teams,” he said.

DiBuono, a track and field star who specializes in the hammer throw and weight throw, rewrote the Fordham record book. A three-time event winner at the Atlantic 10 Championships, he also is a two-time “athlete of the meet” at the Metropolitan Championships and the hammer throw champion at the 2009 Penn Relays.

Liguori wrapped up her collegiate career with her second straight undefeated singles season in 2008-2009, earning First Team All-Atlantic 10 honors. She was a perfect 19-0 this past year and won the singles title last October at the 2008 Eastern Collegiate Invitational at the United States Military Academy.

Speaking to the athletes before dinner, Joseph M. McShane, S.J., president of Fordham, called them “peerless ambassadors of the University.”

“I believe that it is Fordham’s destiny to be the preeminent Catholic University in the United States. I do not shrink from that statement when I’m in the presence of the presidents of Notre Dame or Boston College,” Father McShane said. “I’m able to say that because of you. You excel in the classroom; you compete with all your heart; and you are the near-ideal representatives of the University in the community.”

“We had six teams rated in the top 10 percent of 800 Division I schools and sports,” McLaughlin said. “We are so proud of the way you represent the University—athletically, in the community and back home.”