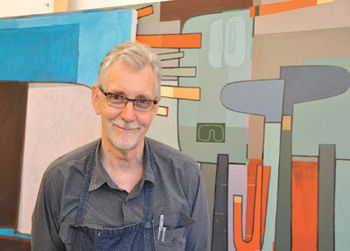 David Storey, assistant professor of visual arts, will use his fellowship period to develop a series of paintings.
Photo by Janet Sassi

Someone once remarked that the gray tones David Storey uses in some of his abstract paintings exactly match the color of old television cathode ray tubes.

This, according to Storey, is probably not accidental. It was during the 1960s age of television that Storey absorbed the influences of the emerging media culture as a “subset” of high modernist design.

“I am very sad that broadcast television has pretty much twilighted,” said Storey, assistant professor of visual arts. “I inhabited television when I was a kid. The late ’50s and the ’60s, that was the good stuff.”

Shades of such good stuff show themselves in many paintings by Storey, whose imagery has been described by critics as “walking a tightrope between the museum and the cocktail napkin cartoon.”

Recently, the accomplished visual artist earned a Guggenheim Fellowship, to begin in January, which will enable him to develop a series of large paintings that explore the scale, configuration and intense focus of his ongoing series of smaller-sized paintings.

In his West 39th Street studio, Storey works regularly in the mediums of both oil-on-canvas and charcoal-on-paper. Since he began making art in the 1970s, he has produced a body of work that has been exhibited in group as well as solo shows. His work is part of the permanent collections of the Museum of Modern Art in New York and the Boston Museum of Fine Art, among others.

“My large paintings are more cerebral and engaged with issues of contemporary painting,” said Storey, who grew up in Northern California. “But my little paintings are special because what comes through in them is something more interior, more personal. I am trying to describe something intangible and historically incidental, but I love the intensity of the results. And to reach that same understanding with a large canvas? That’s what I want to explore with my fellowship. For me, this uninterrupted studio time is the chance of a lifetime.”

Storey spent his formative years in an artistic household. His father and older brother were artists, and Storey recalls spending lots of time paging through design books and feeling at home with art. In particular, he admired the work of the surrealist Jean Arp and the painter Wilfredo Lam.

His own commitment to painting came when he went to the University of California-Davis. There, he discovered that the classes that absorbed and stimulated him were art classes. He stayed on to earn a master of fine arts degree and then began his career as a painter in the Bay Area.

“For a long time when I was starting out, I was dissatisfied with my work,” recalled Storey of his earliest paintings. “I would make a painting and then move on to the next piece as quickly as I could, always wanting the work to be more eloquent, more ambitious.”

But by the time Storey first visited New York City in 1979, he was “over the young and desperate” phase as an artist and on the threshold of making serious work. New York, he discovered, was where he wanted to be, and he moved there the following year.

“For artists, New York City is very, very supportive,” he said. “There is room at the table for everybody.”

Whether drawing upon the suggestive, earlike antennae atop early TV sets, or the cog-like knobs of modern ’60s appliances, Storey has developed his own stylistic idiosyncrasies that inspire a sense of pure joy. Images of animated, machinelike abstractions are often endowed with just the slightest anthropomorphic qualities—figurative elements that keep repeating themselves. One particular recurring theme is the shape of a stylized foot.

“Early on, I realized the power of abstract shapes,” Storey said. “You can take a simple four-sided shape and put two ‘feet’ on it, or maybe four, and it suddenly becomes a pictorial image that is very specific to individual viewers. They’ll say for instance, ‘Oh, that’s a nice cat,’ when it’s really just a square.”

Even though Storey is a 21st century artist working within—and influenced by—the postmodern age, he sees his paintings as creations that are not culturally fixed in one time and place. An observant and informed viewer today may look at the works of Renaissance painters and have no true understanding of the complexity of what those paintings meant at the time they were made. When the awareness of the original cultural moment has faded, the observant public will find ever new and equally complex insights in the work.

“I don’t have a formal statement defining what I want people to get from my work, even though I’m always thinking about life and death and sex and all those tumultuous issues we have to grapple with. In the end, it’s all about mortality, human nature and the bright spots,” he said.

“What I am after is something beyond just a good painting. I want to give each painting enough so that, once it leaves the studio, it can take care of itself, no matter what.”